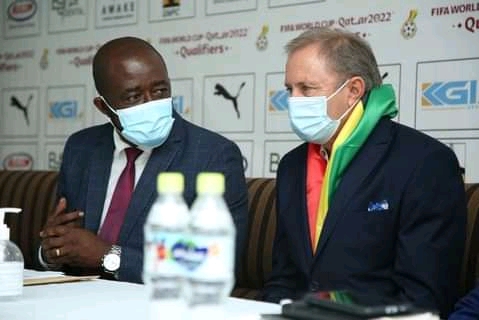 The Ghana Football Association (GFA) has officially announced the appointment of Serbian tactician Milovan Rajevac as the new head coach of the Black Stars, Owosports.com.ng reports.

According to Ghana news outlets modernghana.com, the role of the Ghanaian coaching job became vacant after the Ghana FA took the decision to sack Coach CK Akonnor on the back of the national team’s defeat to South Africa in the 2022 FIFA World Cup qualifiers.

Following the formation of a three-member committee to find a new head coach for the Black Stars, an agreement has been reached to re-appoint Milovan Rajevac for the job.

On the back of successful talks, the GFA has today held a press conference to unveil the gaffer as the new head coach of the Ghana male senior national team.

The Serbian tactician has penned a renewable one-year contract and will be on a $30,000 monthly salary.

The return of the coach to Ghana becomes his second stint following a first stint that spanned between 2008 and 2010.

Since leaving Ghana, coach Milovan Rajevac has had stints with Algeria, Thailand, as well as Qatar.

With the Black Stars, he has been tasked to ensure the team qualifiers for the 2022 FIFA World Cup and also wins the 2021 AFCON.