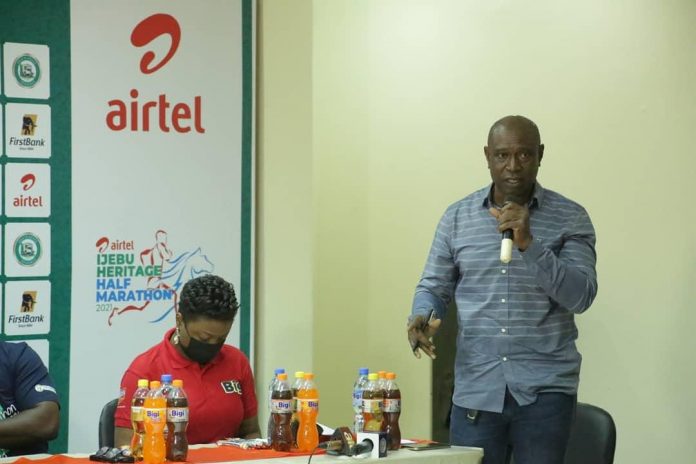 With the maiden edition of the Airtel Ijebu Heritage Half Marathon just few hours away, the Headline sponsor of the race, Airtel Nigeria Limited and partner, Rite Food, the official beverage for the race, has urged the athletes to go for the ultimate prize as they welcomed them to the Ijebu Ode community and Ogun State.

Speaking during the world press conference to herald the race, the CEO of the consultant for the race, Bukola Olopade, praised all the people that made the race happen especially the organisers, Ijebu Heritage Club.

The former commissioner for sports in Ogun State started that all the Road Races in the state, starting from the Abeokuta 10km Race to the Remo Ultra Marathon and now the Ijebu Race were all babies of the state governor, Dapo Abiodun.

“Road Races in Ogun state are all the governor babies as he agreed for the race to go round the state,” Olopade said
“I am excited that at Nilayo we are doing this in Ijebu Ode known for their hospitality. I am happy about the interest of The king, HRM Oba Sikiru Adetona, the Awujale of Ijebu Land, who is also excited about the race and other activities involving the youths in the state.”
The representative of the Headline sponsor, Airtel, Oladipo Jolaosho, Regional Operating Director, West, who brings greetings from the Managing Director of the organisation, Segun Ogunsanya, revealed the joy of Airtel to be part of the Race while thanking the organisers for coming up with such a laudable idea.

He added: “We commend all participants ahead of the race, only one winner but great to start the race, and more special for finishing the race. Regardless on your position, we thank you for coming.
“We are key stakeholders in Ijebu and the whole of Nigeria and the marathon gives us another opportunity to be part of great deeds.”
The official beverage for the half Marathon and other races, the Bigi brand of Rite Foods, was represented by Bolu Adedugbe, Brand Manager Beverage and Bakery, assured all athletes and fans of enough beverages during the race.

According to her, they will continue to support and partner whatever will bring healthy competition between the youths and the people of Nigeria, while praying for the best man to win.
The commissioner of sports in the state, Kehinde Oluwadare, and the chairman of Heritage Group, Ijebu Ode, Mr. Odulaja, assured everyone of absolute security before, during and after the race.

Exclusive: Tope Olusesi Reveals Why He Was Stripped Off The Captain’s Armband At Rangers And His Departure

Peseiro Confident Of Super Eagles Abilities Ahead Of Algeria Clash