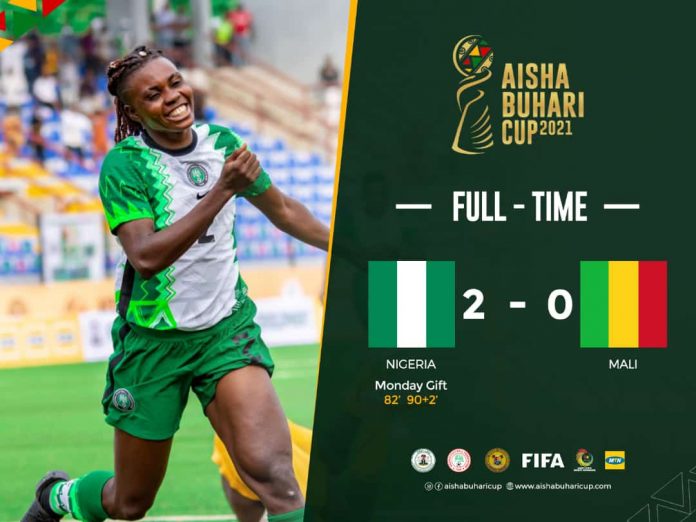 Substitute Gift Monday handed Nigeria a sweet 2-0 victory on the opening day of the maiden edition of the Aisha Buhari Invitational Women’s Tournament in the City of Lagos.

Monday, interestingly a player of FC Robo Queens of Lagos, spun in the air to meet a cross by Captain Asisat Oshoala in the 83rd minute and nod past goalkeeper Fatoumata Karenta, six minutes after coming into the fray for Francisca Ordega.

The goal put the Super Falcons in the lead after a rather turgid day on Lagos island, with the Malians showing greater zest and desire in the opening half and returning after the recess with the same impressive fighting spirit.

The visiting Female Eagles had survived a raid on their area in the 5th minute as Nigeria looked to go into the lead with a corner, but the defence cleared. Nine minutes later, Ordega sidenetted from another quick dash upfront, and in the 18th minute, Ageusissa Diarra tested goalkeeper Chiamaka Nnadozie from a 30-yard free-kick.

In second half, Uchenna Kanu sidenetted in the 67th minute, before Oshoala, who should have scored with only the goalkeeper to beat, failed to get past Karenta. In the 74th minute, Karenta again saved from Kanu.

In the 83rd minute, Monday rose highest in the box and nodded past Karenta, bringing so much excitement to the Arena.

One minute into added time, Monday was again at the end of an Asisat assist, and looped the ball over an advancing Karenta to put huge smiles on the face of Nigerians.