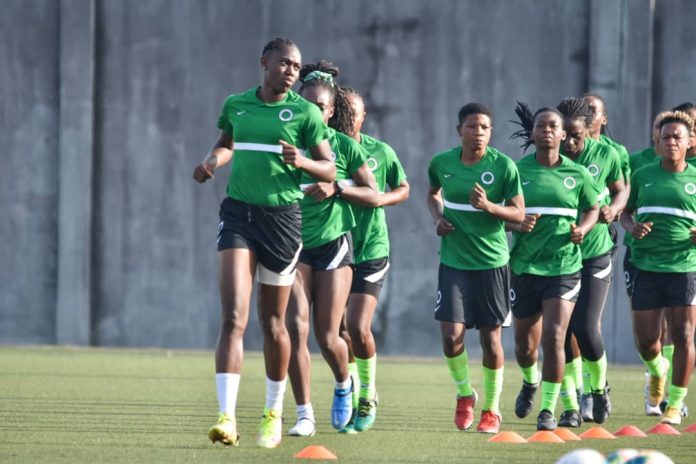 Reigning African champions Nigeria and opening –day opponents Mali both had a feel of the remodelled Mobolaji Johnson Arena on Tuesday, less than 24 hours to Wednesday’s commencement of the maiden edition of Aisha Buhari Invitational Women’s Tournament in the City of Lagos.

Both teams will lock horns on the lush turf of the new, impressive arena, hitherto known as the Onikan Stadium, and which has now been upgraded to a jaw-dropping, compact venue capable of hosting a range of international games.

Governor Babajide Olusola Sanwo-Olu, who has not hidden his keen desire to see to the success of the six –day invitational in the City of Aquatic Splendour, made his way unannounced to the Mobolaji Johnson Arena both on Monday evening and on Tuesday morning, with firm gubernatorial directives to the contractors to get done quickly with the little touches left on the structure.

On Tuesday morning, at a meeting with the Local Organizing Committee led by Barr. Seyi Akinwunmi, the First Lady of Lagos State, Dr (Mrs) Ibironke Sanwo-Olu said she was personally excited by the remodelling of the Mobolaji Johnson Arena and commended the LOC for the ideals, vision and mission set for the tournament, and for encouraging the Future Assured Programme of the First Lady of the Federal Republic, Dr (Mrs) Aisha Buhari.

Dr (Mrs) Sanwo-Olu also praised the tremendous work of the LOC, including the feat of attracting President of world football –governing body, FIFA, President of CAF, Secretary General of FIFA and other distinguished personalities in world football to the opening ceremony billed for Wednesday.

All the teams taking part in the tournament are on ground, with South Africa’s Banyana Banyana arriving on Monday evening after a six-hour cruise aboard a South African Airways flight from Johannesburg.

Africa’s leading billionaire industrialist and philanthropist Alhaji Aliko Dangote will lead Corporate Nigeria titans to a dinner in honour of Infantino and Motsepe at the Eko Hotels and Suites, Victoria Island on Wednesday night.