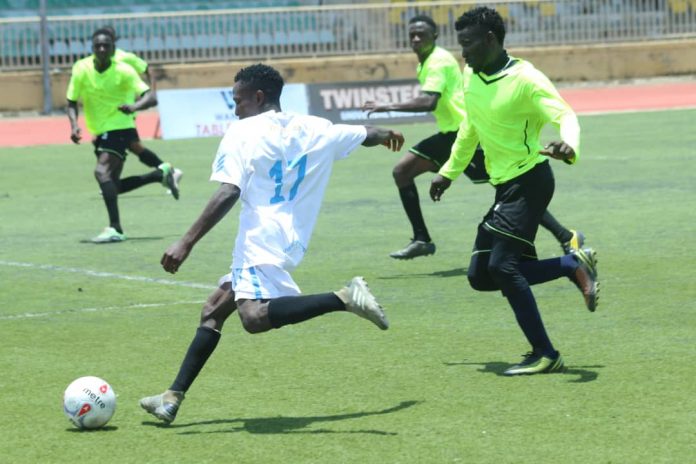 Men have finally been separated from the boys as quarter finalists have emerged in the ongoing Amapro 2021 Scouting Tournament taking place at the Main Bowl of the Ilorin Stadium, Kwara State.

Despite beating NNL All Stars 1-0 via a sweet goal by Kale Al-Amin, ABS FC still failed to qualify to the quarter final after finishing third behind NNL All-Stars on inferior goals difference.

Jazzy Stars FC of Jos maintained their unbeaten runs and the only team yet to concede a goal in the whole tournament so far, as they held Pro-Leaguers to a 0-0 draw to finish as the group leaders of group D into the quarter final stage.

Ajaokuta FA’s John Bolus got the only goal as the Steel boys beat NLO All Stars 1-0.

Two goals by Joel Opadotun in the 10th minute and Ramon Azeez in the 11th minute were all William Fala FA needed to beat Teworh SC 2-0 and qualify to the last 8 of the tournament.

Faria SC also made it to the big boys stage after overcoming Knights FC 1-0 in the last group match.
Samson Isiaka scored the only goal for Farai SC.

Here are the quarter final fixtures:

Mokwa FA Vs NNL All Stars

Abraysports Vs NPFL All Stars

NLO All Stars Vs Da Faria.