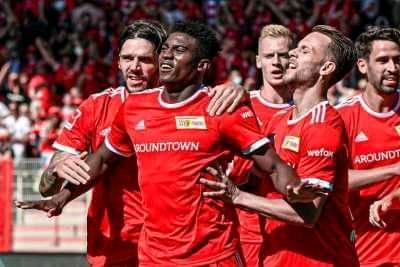 Nigeria International Taiwo Awoniyi was on target as Union Berlin and Bayer Leverkusen settled for a 1-1 draw in the German Bundesliga openner on Saturday.

The 2013 Fifa U17 Worldcup winner broke the deadlock in the seventh minute to put Union Berlin ahead.

The lead however lasted for only five minutes as Moussa Diaby leveled up for Leverkusen equalised.

In the 63rd minute Awoniyi was replaced by Andreas Voglsammer after going down with suspected cramp.

The striker who spent last season on loan at the club rejoined the German side on a permanent deal from Liverpool this summer.

Union Berlin’s next game will be against KUPS in midweek in the newly introduced UEFA Europa Conference League.