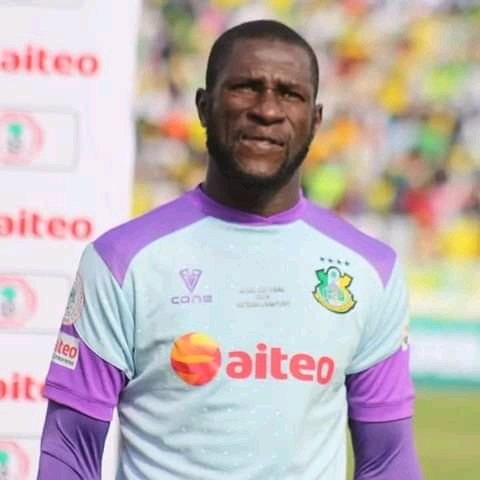 Goalkeeper Suraj Ayeleso has sent Kano Pillars an emotional farewell message after he completed a move to Northern city rivals Plateau United where he signed a two year deal which runs until the summer of 2023, Owosports.com.ng reports.

Ayeleso who had previously had stints with ABS FC and Kwara United spent two seasons with the Sai Masu Gida after joining from Nasarawa United in 2019.

He who took to his social media page (Facebook) on Thursday to announce his departure thanked the management and fans of Kano Pillars for the love, support and opportunity to be part of the club history.

He confirmed that Pillars will forever remain in his heart as he’s hoping to make another history with the Tin City side.

Today I say goodbye to a magnificent club as it is Kano Pillars. I want to thank the club for helping me become a better footballer and for making me feel at home during my time here.

“About two years ago Kano Pillars, a club that will remain in my heart, gave me the amazing opportunity to play for one of the most respected football club in Nigeria and Africa at large. And for me winning the Aiteo Cup and playing on the continent in two years is a dream come through for me.

“After this year I can only say thank you to the club, the management and to the fans that have supported me since the first day I wore the Sai Maisugida jersey and of course thank you and good luck to my team-mates, who helped me settle in since day one not only as a teammates but as friends.

“Today I say goodbye to Kano Pillars but I take with me many memories, lessons and great moments that will live with me forever. It has been one of the best years of my football career.

“At last I want to wish Kano Pillars many success for the future and thank the club for giving me the opportunity to play for this great club. Its time to move on for another challenge and I hope to make more positive history with Plateau United.

“Thank you with all my heart,” he said.

He won 2019 Aiteo Cup trophy with Kano Pillars when his heroics between the sticks during the shootouts helped Pillars to beat Niger Tornadoes in the final.

The Kwara born goal tender will be working with Fidelis Ilechukwu who has just been appointed as the new Technical Adviser of Plateau United following the departure of Coach Abdu Maikaba after the just concluded NPFL season.