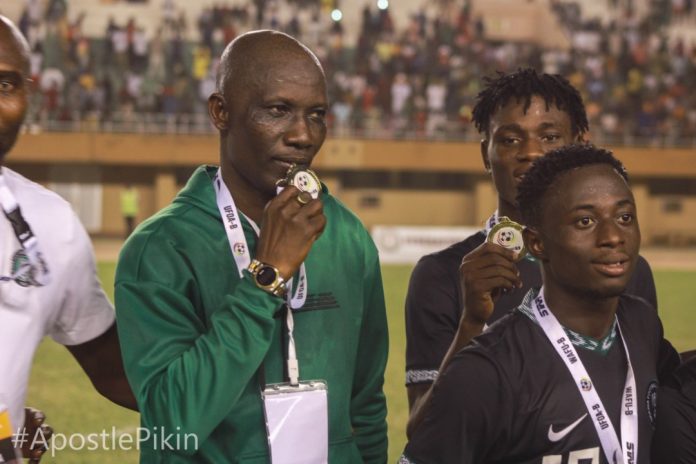 Where Eguavoen and others failed, Bosso has passed.

The Minna born president of Nigeria coaches association has shown why he is still one of the best hands around.

On Friday in Niamey, Bosso wrote his name in gold and helped to wipe away the tears following that disastrous loss to Ghana that ended Nigeria’s World Cup hopes.

He started the tournament by humbling the noisy West Africans who thought that after picking the World Cup ticket in Abuja, they have all but cemented their bragging rights over Nigeria

That victory by the Nigerian Under 20 National team gave the fans some measure of assurance and lifted the spirits of many, in a country that has suffered so much heartbreaks due to the dismal performances of the Super Eagles at the last Africa Cup of Nations in Cameroon and the World Cup qualification race.

Coach Augustine Eguaveon raised the hopes of millions of Nigerians in Cameroon but soon left them in tears by being the Eguaveon we have always known.

Bosso has ‘the never say die spirit’, he is always determined to succeed when the chips are down and if there is one man who is not afraid of challenges and responsibilities, Bosso is it.

On Friday in Niamey, Niger Republic, Bosso walked tall to the podium, with smiles boldly written on his face. He looked a satisfied man not only because he has won the Africa Under 20 championship but because he has helped Nigeria to unearth some fantastic footballers who are on the threshold of history by writing their names in the sands of time.

In 15-years old Daniel Dada, Nigeria has discovered a raw gem, too brilliant for his age. He was too good to call and won the MVP when the ovation seem loudest.

Then there is also the midfield maestro Samson Lawal, a player made for the big occasion. This Katsina United diamond is a player to watch in the no distance future. He dazzles and dances with the ball gummed to his feet and leaves his markers crawling whenever he sets out on a mission. He is so good that many are beginning to sing his praises.

Do not also forget the likes of Tolulppe Ojo, who was voted man of the match in Friday’s final.

Fast, daring and intelligent, Ojo was on a a different pedestrian and was majestic in victory.

Ibrahim Mohammed added the icing to the cake with his third goal and left many wondering why a country so blessed will still depend on veterans like Ahmed Musa and Odion Ighalo to succeed when it really matters.

Coach Laddan Bosso has thrown a big challenge to other Nigerian coaches and has reminded us that hardwork pays.

In less than two weeks, he was able to unearth some of Nigeria’s finest talents and has won a trophy to add to the cabinet of a board struggling to impress.

For now and hopefully in the next few months, Nigerians will look back at the memories from Niger Republic and be happy that with these discoveries our country can boldly retire the pensioners and concentrate on the emerging Super stars.

It is also a testament to the fact that there are so many young and intelligent footballers in the Nigeria Premier League but our coaches have not taken time to look deep. If they did, perhaps, Nigeria will not go caps in hands begging rejected stones with dual nationalities to come back and play as if they are doing this great country a favor.

The time to look into the mirror is now! We are more than conquerors and the future can still be bright if not brighter, if we all work together to make it better.