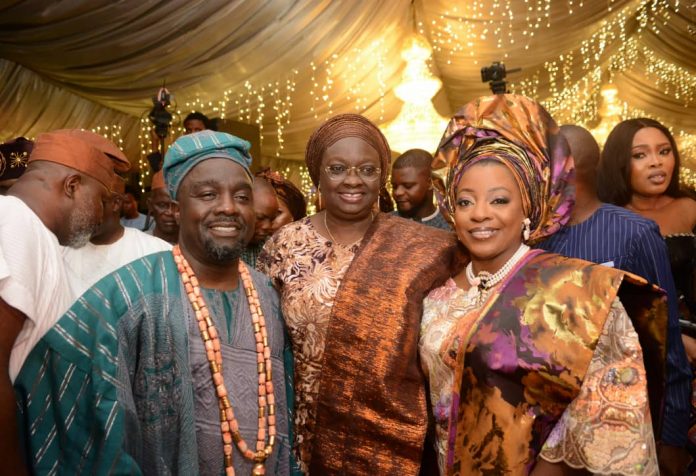 His wife, Chief Yetunde Olopade was also conferred with the title “Erelu Osi Asoju Oba”, few days after the sports entrepreneur and businessman was installed as the Jagunmolu of Gbagura by the Agura, Oba Saburee Babajide Isola Bakare.

Chairman Ogun State Football Association Alhaji Ganiyu Majekodunmi who was in Ghana for the WAFU B Under 17 tournament, was represented by the secretary of the FA, Elder Victor Idowu, Ondo state football Association Chairman, Otunba Sunday Dele Ajayi and his counterparts from other South West states were also present/represented.

The excited Osi Asoju Oba appreciated everyone involved in making the event a success.

In his words “Your Excellency, the deputy governor of Ogun State, my mentor, my father, Otunba Gbenga Daniel, the Agura and other Alayeluwa’s in the house, I salute all our guests in the house today, too many to mention, my mother, Alhaja Moninuola Olopade, Olori Ebi Kayode Olopade, my aunty, Mummy Seye and the entire Olopade family, thank you for all you have contributed to my growth”.

Chief Bukola Olopade also appreciated his children for being resolute all through his time as a political office holder.

He went on to specially appreciate Hon. Kunle Soname for his brotherly love and support over the years, the newly installed Egba High Chief also gave kudos to the NFF President Amaju Pinnick for being a friend and a brother.

Family, friends, and well wishers also took their spot at an event tagged “Party Of The Millennium”