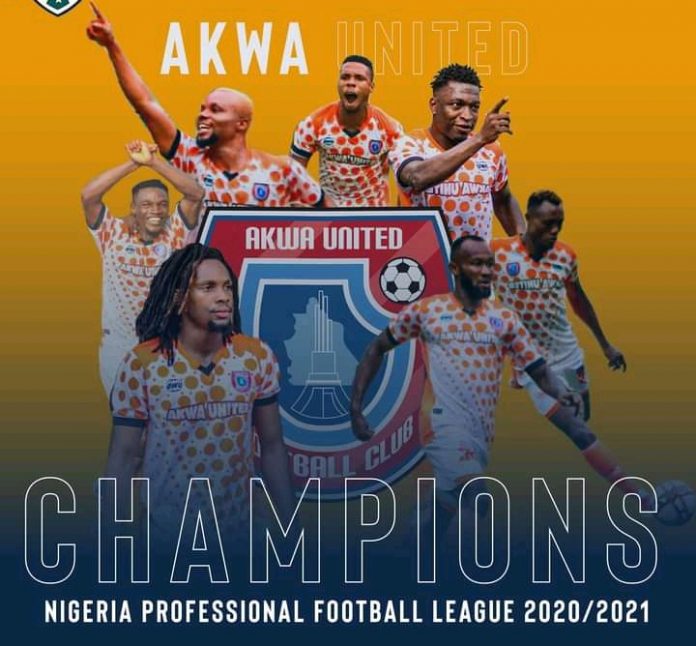 Akwa United have been crowned winners of Nigeria Professional Football League (NPFL) 2020/2021 season after a resounding 5-2 victory over Lagos based side MFM FC at the Nest of Champions Uyo, Owosports.com.ng reports.

Charles Atshimene netted a hat-trick for the Promise Keepers to take his NPFL goal tally to 18th of the season joint top with Nasarawa United’s Silas Nwankwo.

He however opened the goal feast from close range in the 24th minute, Alimi Adebayo head in Mfon Udoh’s cross into his own net to increase the tally for the Promise Keepers late in the first half.

Mfon Udoh after several attempt, his goal finally arrived when he netted the third goal two minutes after the hour mark.

The Olukoya Boys pulled one back from spot in the 68th minute through Michael Mbonu after Dennis Obasi was hacked inside the area.

Atshimene got his second and Akwa United’s fourth of the game five minutes from time.

Obasi reduced the deficit for MFM two minutes from time.

Atshimene completed his hat-trick on the evening late in the game to make it 5-2 to gift Coach Olalekan Gabriel and his MFM FC side their heaviest defeat of the season as they also gifted the large crowd a perfect title celebration.

Kennedy Boboye’s side top the standings with 71 points from 37 matches, having lost only four games this season, which is the best record in the league.