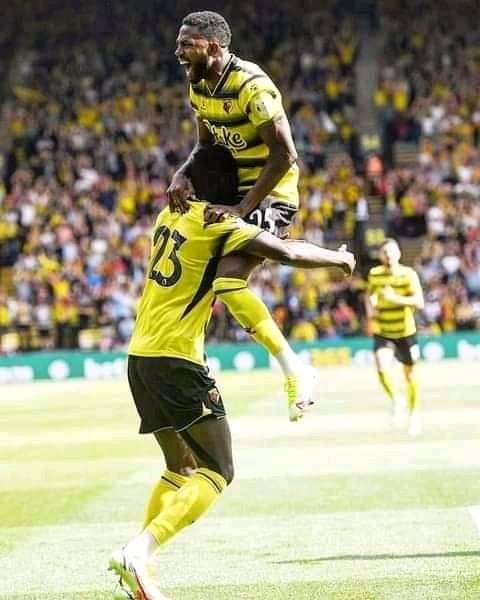 Super Eagles striker Emmanuel Dennis scored on his debuts as Watford made a winning return to the Premier League following a 3-2 victory over Aston Villa 3-2 in their season opener.

Dennis opened the scoring after 10 minutes by driving home the rebound from his own blocked shot.

He turned provider when he set up Ismaila Sarr, whose shot took a deflection off the outstretched foot of Tyrone Mings to send it looping over goalkeeper Emiliano Martinez and into the net three minutes before the break.

The Nigerian suffered a foot injury and was replaced in the 66th minute by Colombian Hernandez. A minute later the 22-year-old curled home an exquisite strike from the edge of the box in his first game for the club after a number of seasons on loan in Spain.

John McGinn pulled one back for Villa with a brilliant strike on the half-volley from the edge of the area four minutes later, but Villa created little until deep into stoppage time when Bertrand Traore won a penalty.

New signing Danny Ings stepped up to fire home the spot kick but it made little difference to the end result as Watford held on to win 3-2.

Meanwhile compatriots Williams Troost-Ekong and Ogenekaro Etebo was also handed their Premiership debute playing the entire duration of the encounter with Etebo being booked late in the game.