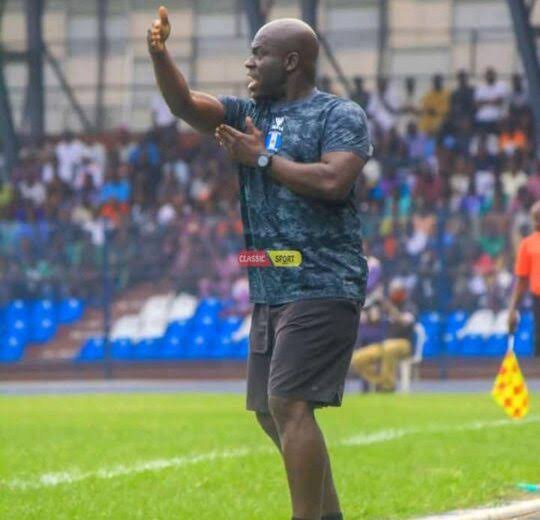 Head coach of Shooting Stars Sports Club of Ibadan, Edith Agoye has stepped down his position as the head coach of the despite being offered a contract extension according to reports, Owosports.com.ng gathered.

Agoye former 3SC attacker in his active days as a footballer tendered his resignation after meeting with the State Governor, Eng Seyi Makinde and the club management on Tuesday.

Agoye who led the Oluyole Warriors to the Nigeria elite league after many years in the Second tier League in an exclusive chat with BSN Sports wrote, “After 9 years as a coach, five years as the head coach in which we gained promotion back to the NPFL and maintained our premier league status, l have decided to leave my position as the head coach of the club.

“l feel it is time for me leave Shooting Stars Sports club, 3SC, in pursuit of new challenges.

He however thanked Oyo State government for the opportunity to lead the South West club, he also extended his gratitude to God, family, 3SC management, fans, supporters and other stakeholders who stood by him during the thick and thin.

“I want to use this opportunity to thank the Oyo state government led by the executive governor Engineer Seyi Makinde for giving me the privilege to serve, and for all the support given me during my stint with the Oluyole warriors.

“I want to also thank the ministry of youth and sport, the Oyo state football association, the Oyo state sports council, the IFA, the management and staff of 3SC, all the fans, supporters and Supporters club of 3SC.

“I also want to thank my technical crew and support staff, numerous stakeholders and all the players that played under me during my tenure with Shooting Stars.

“And lastly my gratitude goes to God, my wife and children, for standing by me during my tenure with 3SC.”