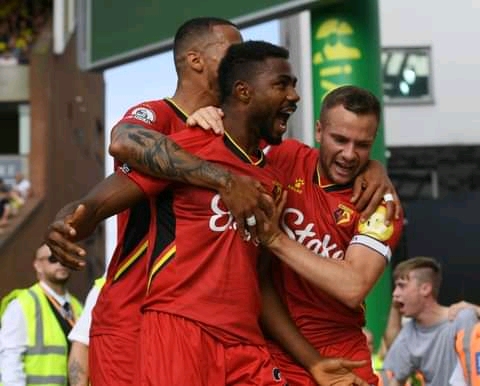 The Nigerian International broke the deadlock early in the 17th minutes to put The Hornets ahead after being assisted by Kiko Femenia, Teemu Pukki restored parity for the home team ten minutes before the break.

Senegalese International Ismail Sarr scored a brace in the 63rd and 80th minutes to give Watford a comfortable 3-1 win away at Carrow Road making it two wins in their five opening EPL matches for the Hornets who where coming on a bounce of three consecutive defeat.

It was his second goal for Watford since joining the English side from Belgian top-flight Club Brugge in the summer, after his opening day strike in their 3-2 win over Aston Villa.

Defender Williams Troost-Ekong featured for 90 minutes, while Midfielder Ogenekaro Etebo came off the bench in the 80th minutes to replace Tom Cleverly.