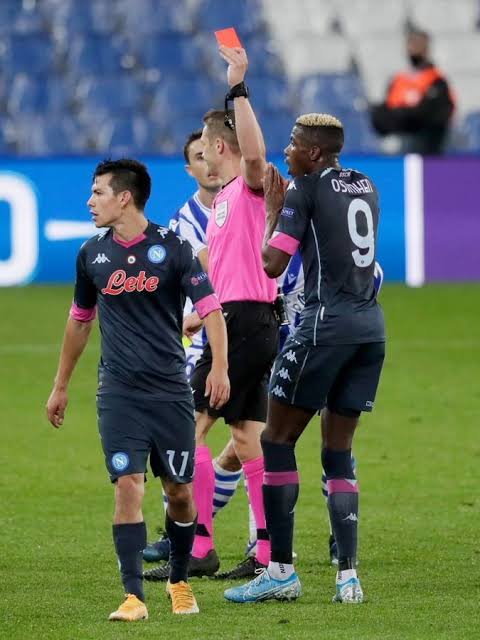 Super Eagles striker Victor Osimhen was shown a red card in Napoli’s 1-0 away win over Real Sociedad in the UEFA Europa league fixture on played on Thursday night in Spain, Owosports reports.

The Italians recorded their first win of the campaign thanks to Matteo Politano 56th minutes strike following a nice ball from Tiemoue Bakayoko, firing a shot from the edge of the box which took a massive deflection on its way to the back of the net.

Meanwhile, Victor Osimhen was shown a red card towards the closing stage of the game after he picked up two yellow cards in quick succession.

Another Nigerian in action on the night was Olanrewaju Kayode who registered his name on the score sheet but could not prevent Sivasspor from losing 2-1 to visiting Maccabi Tel Aviv, in Group I of the Europa League.

Kayode who has now scored two goals in his second Europa League appearance this season, was replaced on 75 minutes.

It was Sivasspor’s second defeat in the group and are third with no points so far.

Samuel Chukwueze and his Villarreal club in the same group with Kayode’s Sivasspor, got a 3-1 win away at Qarabag.

Chukwueze provided an assist for Villarreal’s second goal, as he set up Paco Alcacer in the 85th minute to put them 2-1 ahead, before coverting a penalty in the 90th minutes to seal the victory for yellow Submarine.

It is now two wins from two games for Villarreal who top the group on six points.

Kelechi Iheanacho came off the bench for Jamie Vardy with 20 minutes left as Leicester City beat AEK Athens 2-1 in Greece.

It was Iheanacho’s second appearance in the Europa League this campaign.

Vardy put Leicester 1-0 ahead from the penalty spot on 18 minutes while Hamza Choudhury made it 2-0 on 39 minutes.

AEK pulled a goal back through Muamer Tankovic four minutes into the second half.

Leicester are second in the group on six points, same points as leaders SC Braga of Portugal.