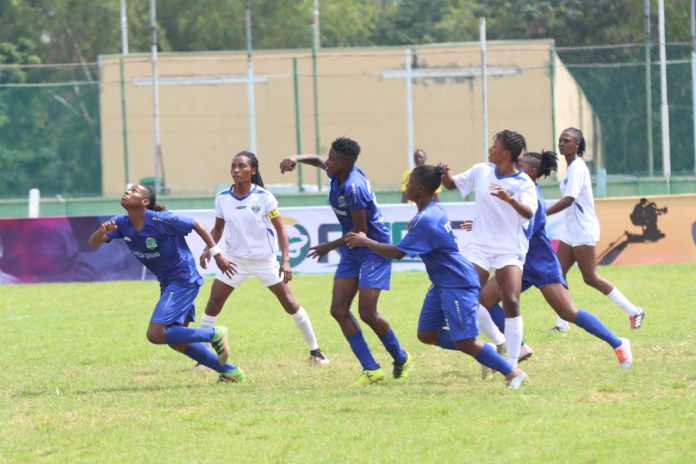 Defending Champions, Bayelsa Queens suffered a 1-0 defeat in the hands of rivals FC Robo Queens in what was the repeat of the 2021 AITEO Cup final.

The game got off to a lively start with FC Robo Queens dominating the early proceedings with the defending champions unable to penetrate the ‘Lagos Landladies’ defence in the opening 10 minutes.

Neither side produced any chances of note after 15 minutes of play as Bayelsa Queens look happy to invite FC Robo Queens into their own half.

FC Robo Queens had the first real chance of the game in the 16th minute when Ajakaye raced away on the counter before squaring the ball towards Ijamilusi in the box, but it didn’t quite had any effect.

Yahaya Marylene finally scored the solitary goal of the game and first of the 2021 Flying Officers Cup in the 18th minute as she beat helpless Monle Omini in goal for Bayelsa Queens after receiving a cross from Esther Onyenezide.

Osun Babes had to come from behind in the second game of the day to secure a 2-1 win over Prince Kazeem Eletu Queens FC.

Eight minutes from full time, Osun Babes took the lead for the first time in the game as Suliat Ajibade took advantage of a loose ball from Prince Kazeem Eletu Queens’ defence and made it count.

The final game of the day between Confluence Queens and SGH Sports Academy ended 4-0 in favour of the Nigeria Women Football League (NWFL) Premiership side.

Mercy Omokwe scored the fastest goal of this year’s tournament immediately after kick off to give Confluence Queens the lead.

Actions will continue tomorrow, as Sunshine Queens will play against WACO Ladies in the first game of the day by 8am, two time finalists, Nasarawa Amazons will tackle Edo Queens by 10:30am in what seem like a repeat of the 2019 Flying Officers Cup final. Lakeside Queens will be up against Dannaz Ladies by 1pm, and by 3pm, Naija Ratels will hope to do better when they play against Royal Queens in their second game of the competition.