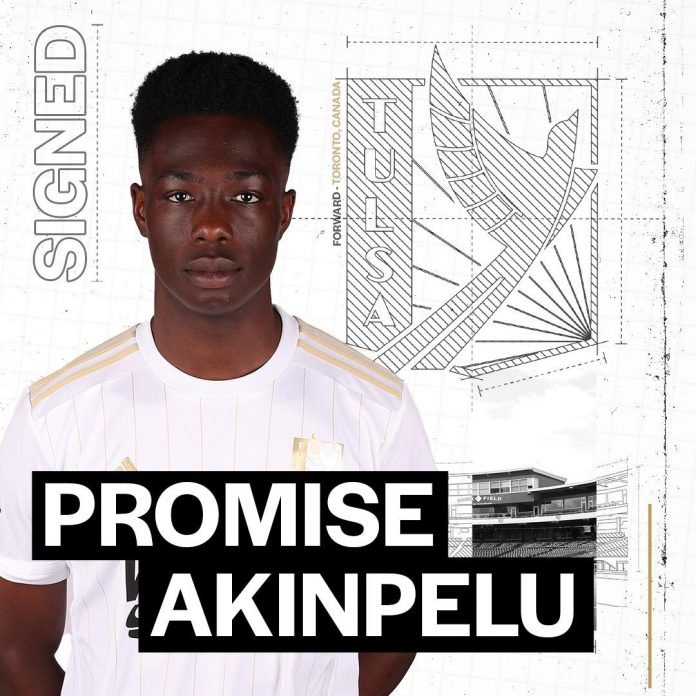 Promise Akinpelu could be all that FC Tulsa needs to regain promotion to the Major League Soccer as the for Young striker has been gradually developing climbing the ladder to stardom with God’s given abilities.

He then moved to NK Trnje (Treca HNL) in the Croatia third division league in 2019, Akinpelu’s talent was evident from a very young age playing in the Toronto Fc Academy.

Akinpelu can play as a right winger and a center striker, he ticks all the boxes that make an elite striker he combines flair and trickery with directness, showing eagerness to drive the ball forward and taking on defenders to create imbalances. He is a technically refined footballer with excellent shooting technique and close control.

The 20-year-old combines his flair and marvellous technical ability with directness and verticality. He shows constant willingness to drive the ball forward by taking on players, creating imbalances by taking advantage of numerical superiorities. His flair, close control, acceleration, agility and strength makes him menacing in attacking transitions.

The Young Akinpelu has a natural ball-striking ability. He requires very little backlift while shooting; he hits through the ball to generate impressive power with seemingly little effort. He is assured in his finishing, consistently hitting bottom corners. Most of his shots are towards the goalkeeper’s right, with sufficient bend on them to beat the goalkeeper.

He is a proactive ball carrier, i.e. most of his carries are progressive. He drives the ball forward with speed and conviction. He is comfortable receiving the ball on the run and sets himself up to attack with very few touches.

Akinpelu can spot short passes and through balls and execute them precisely. His short passes are well directed with appropriate weight and played to the strong foot of teammates. He looks to play quick 1-2s with other forwards and can execute them when he is in motion. His link up play is good when he is not under pressure. He can also pick out passes into the box after cutting in from the left.

The Canadian born Nigeria decent prodigy will indeed be the messiah FC Tulsa needs to take them to the promise land.