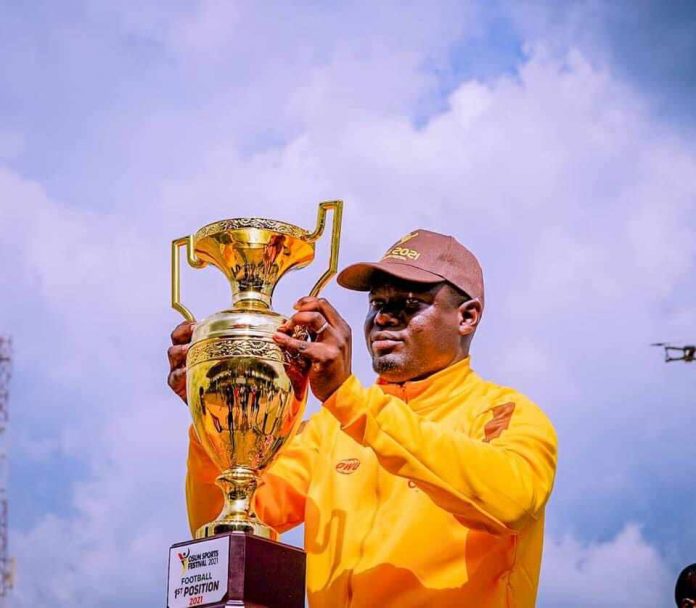 Basking in the euphoria of the success recorded at the maiden edition of the Osun Sports Festival tagged OSF21, Honourable Yemi Azeez Lawal deserves all the encomiums and indeed the positive-minded people in the state who want to see sports thrive.

This write up is not geared towards praise signing the subject matter, Lawal as other challenges still lie ahead but as I pour my thoughts out, HIS Excellence Governor Adegboyega Oyetola deserves some kudos too for breaking barriers naming Lawal as Commissioner for Youth, Sports and Special Needs in 2019.

Uneasy they say lies the head that wears the crown, that was the case of Honourable Yemi Lawal after he assumed office as Osun Sports was in disarray and needed solutions been proffered to.

Like every other Commissioner that has come and gone, Lawal is an exception as he came with a blueprint all with the view to restructuring sports in the state. His blueprints gave birth to the Osun Sports Festival which was a success as we were living witness to, except one wants to rob Paul to pay Peter by not wanting to give him credits.

Lawal is not the loquacious type rather reserved, his qualitative depth, diligence and commitment to hard work has seen him achieve much within a short period, thus sealing the lips of his critics who are known for their ‘Pull Him Down Syndrome’.

Just two years down the line, he has gradually navigated his ways calling the shots amidst the myriads of problems that keep cropping up, day after day in a state, that sees sports as a recreation, not as a revenue-generating industry.

He also had to stick out his neck to mediate in the controversy surrounding contract coaches and performing athletes for peace to reign for other sports to thrive.

These are some of the peculiar challenges Yemi Lawal faced before focusing on the financial challenges each sports association in a state where facing, as sports funding was largely done by the state government.

For the avoidance of doubt, the rot in Osun sports did not start today neither was it orchestrated by Yemi Lawal. It is something that could be traced to the decline in government support and the appointment/election into the office by selfish sports administrators who think more about personal benefits than the interest of the state.

But, was there a chance for Lawal to solve all these problems in 4years? The answer was NO for critics who lacked vision by not wearing the thinking and problem-solving caps. But as he made efforts to address some of the issues, light began to shine at the end of the tunnel as YES became the answer.

Take for instance the just concluded maiden Osun Sports Festival tagged OSF21, which targeted at discovering talents from the different nooks and crannies of the state. This was because successive governments had only committed funds towards football only, hence neglected other sports.

On record, more than 1,000 athletes took part in 31 different sports and football, as dreams became realities and above all individual or team records were made at the sporting fiesta that promoted friendship among athletes from the Local Government Councils and Development Areas in the state.

However, Yemi had dared to be different from previous Commissioners by embarking on massive reformation. For the first time, I saw a man who was not afraid to tread where many have failed.

Many may refuse to see what he has been doing but posterity will surely judge the Sports Commissioner as one who moved mountains to get Osun sports to a greater height.

But this is just the beginning as he is not relenting despite knowing that many obstacles still lie ahead.