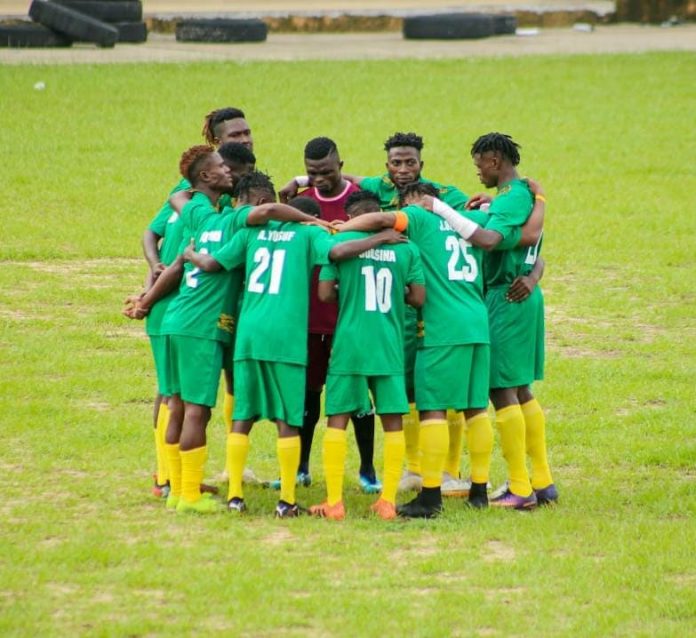 The valuable point ensured Gateway United maintained their one point lead at the top of the summit with 26 points.

In a game of significance, Ibukun Araromi was one of Gateway United’s many heroes, producing a brilliant save to deny Adrian Edidour’s spot kick in the 50th minute, a telling moment in the game.

With 15 minutes after kickoff, Gateway United almost took the lead when Victor Adeoye swept wide his shot from 20 yards in the 15th minute. Araromi Ibukun then produced a massive save in the 40th minute, tipping over a thumping header.

10 minutes into the second half, centre referee pointed to the spot for a handball. On replay, the ball only brushed Iwundu Chidozie’s chest and not his arm. However, Ibukun dived to the left to parry Adrian’s penalty.

Gateway United was then kept busy at the back with timely clearances just to keep the visitors at bay. However, in the 90th minute, Sunkanmi advanced to the hosts’ box in a counter fashion but his cross aimed at Babalola Azeez was blocked for a corner as the visitors saw off a point in Akwa Ibom.

Coach Toyin Ayinla was full of praise for his side’s show of bravery, resilience and determination.

“What a game. A hard fought one. We knew it was risky to lose concentration at any point, so we glued our focus to the game. We planned for a win but we got a draw. Well, a point is better than none, a valuable point at that”

“I commend the boys for an impeccable showing. 9 matches to go, still a long way. So we will continue to take it a game after the other. Our ability at picking a point away is no longer in doubts, we will now focus on picking maximum home and away. All thanks to the Almighty” he concluded.