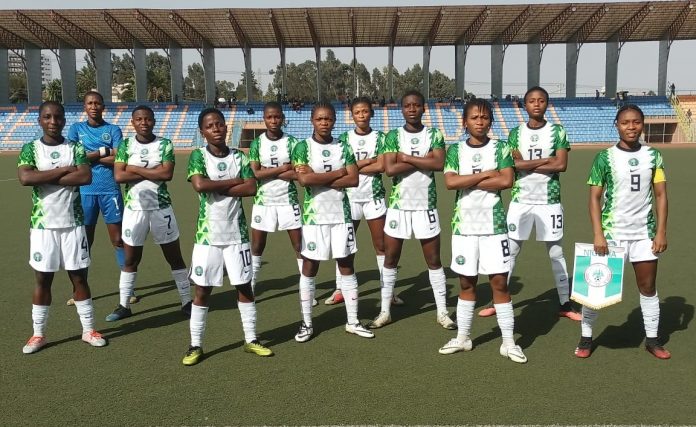 Prolific striker Opeyemi Ajakaiye took her goals’ tally to six in the ongoing FIFA U17 Women’s World Cup African qualifying series when she scored the only goal as Nigeria edged hosts Ethiopia in Addis Ababa on Friday afternoon.

In the final round, first leg duel staged at the Abebe Bekila Stadium, both sides had failed to make hay from a number of opportunities in the first half-hour, but the lithe forward struck in the 36th minute after she was put through by diminutive midfielder Taiwo Afolabi.

The goal meant Ajakaiye had scored in each of the Flamingos’ five matches of the qualifying series so far, including a brace against the Democratic Republic of Congo in a 5-0 spanking in Benin City.

Omowunmi Bello, who scored three of the goals in Nigeria’s 6-0 aggregate thumping of Egypt in the earlier round, came close to increasing her own tally in the campaign, only to see her 35 –yard shot rock the upright in the 50th minute.

Kumneger Kebede, Emush Daniel and Bethelem Germa all had chances to equalize for the homers in the second period but met with an unyielding Nigeria rearguard and an inspired goalkeeper Faith Omilana who had an excellent game.

Both teams will clash again at the MKO Abiola National Stadium, Abuja on Saturday, 4th June with the winner on aggregate qualifying as one of Africa’s three representatives at this year’s FIFA U17 Women’s World Cup finals in India.