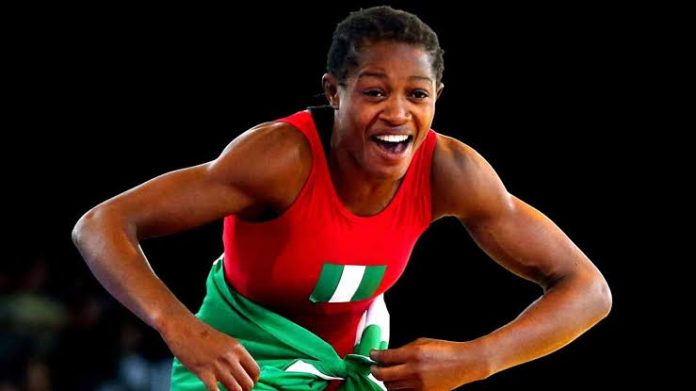 Reports has it that Nigerian Female Wrestler, Odunayo Adekuoroye has reportedly concluded plans of adopting another Country after the 2020 Tokyo Olympics, Owosports.com.ng garthed.

Odunayo Adekuoroye who is set to represent Nigeria at the Women’s Wrestling freestyle 57kg match on Thursday, is understood to have made up her mind not to return to the Country after the Tokyo Olympics games.

According to veteran journalist, Godwin Enakhena who is a close source to the Wrestler on his program on radio (Top Sports) on Tuesday broke the news, monitored by BSNsports disclosed that the Wrestler will not return after the Olympics.

“Odunayo Adekuoroye will not return to Nigeria after the Olympics.

“She will be going to school in America and thereafter will chose to represent another country.”

It was also stated that Odunayo Adekuoroye is an adopted daughter of the General Overseer of Mountain of Fire and Miracles Ministeries, Dr Olukoya who has made every necessary arrangements for her to school in the Americas

Dr Olukoya shouldered the responsibilities of taking care of the abandoned athlete after Godwin Enakhena took her to him. He has been responsible for all her trips, trainings and retraining across the world.

Exclusive: Tope Olusesi Reveals Why He Was Stripped Off The Captain’s Armband At Rangers And His Departure

Peseiro Confident Of Super Eagles Abilities Ahead Of Algeria Clash