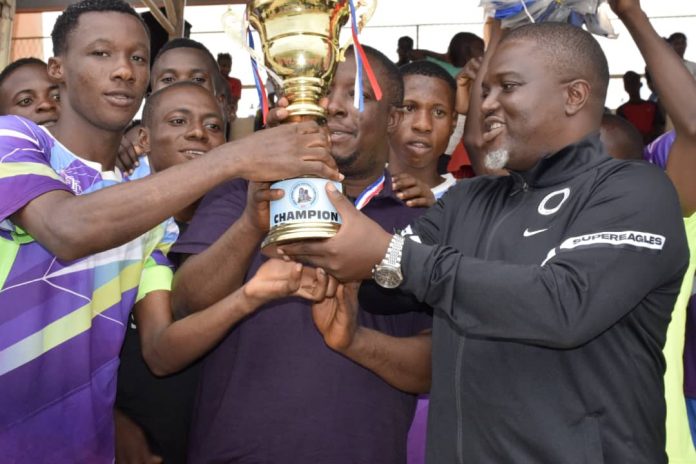 It was an impressive and outstanding performance from La Planet Sports Academia on Sunday when they clinched the maiden edition of Okaa Sports Youth Football Championship- defeating Champion Football Academy 4-1 in an action packed final.

Coach Sheriff Jimoh led La Planet came from behind to dominate the game and outshine their opponent after conceding a goal through Ahmed Lukman of Champion FA earlier in the encounter.

With the first half of the game ending in 1-1, La Planet came in to the second half to root out their opponent leveraging on the numerical strength gained from the red card given to one of the latter’s defender in the first half.

Oladele Abiodun grabbed a brace in La Planet’s decisive come back in to the game while Ibrahim Alonge and Ajao Sodiq consolidated the lead.

The 10-team-featured tournament which was organised and sponsored by the CEO, Okaa Sports Ventures, Alhaji Adelodun Abdullahi was aimed at promoting football development at the local level while also offering talents opportunity to improve and perfect their skills.

Earlier, a novelty match involving Okaa Sports fans and friends had held as a prelude to the final show piece.

Speaking to newsmen after the game, Alhaji Adelodun stated that his passion and love for the development of football motivated his decision to sponsor the championship.

The astute entrepreneur who specializes in the sales of sports collections and equipment noted that the project had helped in the discovery of more talents as he a promised to make the football fiesta an annual event.

Meanwhile , the CEO and Publisher of Sportspro News, Bayour Issah commended the sponsor for his generosity while describing the initiative as worthy of emulation.

The highlights of the event was the presentation of awards and commemorative medals to sports personalities as well as gifts to all the registered teams.