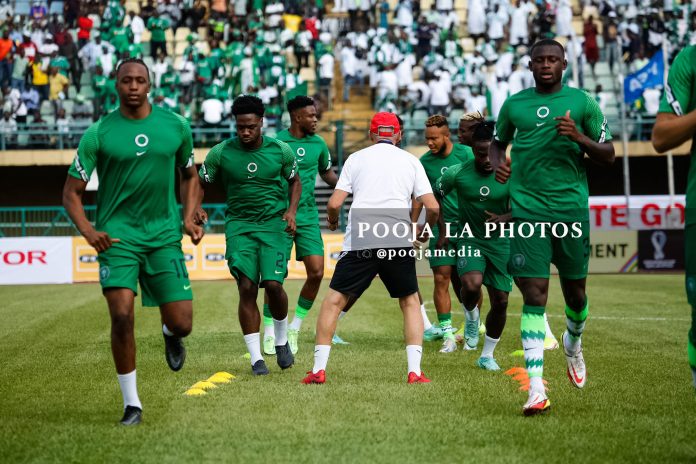 Karl Namnganda’s stoppage-time shocker, after a defensive slip-up, took the Super Eagles and the sparse crowd, as well as scores of millions watching on television by surprise and handed the visitors all three points in a crucial World Cup qualifying tie.

Kelechi Iheanacho, Moses Simon, Victor Osimhen and Chidera Ejuke, and later on Taiwo Awoniyi, Ahmed Musa and Samuel Kalu, threw everything at the Les Fauves, but the visitors defended in numbers and goalkeeper Prince Samolah had an inspired game.

Table-toppers Nigeria were expected to make a mincemeat of the visitors, who were bottom of the pool before the game, but the Eagles failed to find a way past a rearguard of Captain Saint-cyr Ngam-Ngam, Peter Guinari, Flory Yangao, Sadock Ndobe and Melky Ndokomandji.

In the 16th minute, Victor Osimhen got too much purchase on his first touch and saw goalkeeper Samolah scoop the ball, and seven minutes later, Ngam-Ngam came to the rescue for a timely block as the Napoli of Italy man was about to pull the trigger.

In the 29th minute, Nigeria had a strident penalty appeal rejected by referee Abdel Aziz Bouh from Mauritania, when it appeared the ball clipped the hand of Ndokomandji after a shot by Chidera Ejuke.

Ejuke ran, turned, dribbled, sizzled and shielded the ball in a creditable performance, but his efforts and those of his team-mates failed to yield the much-needed goal until disaster struck in stoppage time.

With Cape Verde’s Blue Sharks winning 2-1 away against Liberia in Monrovia, the Eagles retain their leadership of Group C, but cannot afford any slip-up as both Cape Verde and Central African Republic are now on four points, with Liberia shoved to bottom place with three.

Both teams have another face-off in three days, in a Day 4 encounter at the Stade Japoma de Douala in Cameroon. That match will start at 2pm Cameroon time on Sunday.