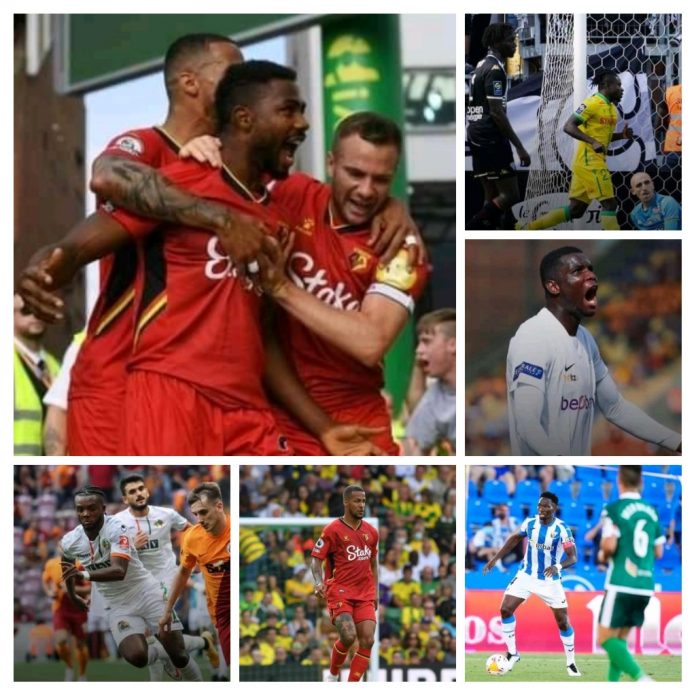 A round-up of Nigerian players that were in action for their respective clubs in the Europe this weekend.

In England Frank Oyenka saw just 22 minutes of action as Brentford picked up their first away win of the season, beating Wolverhampton Wanderers 2-0 at Molineux Stadium in the West Midlands.

Ivan Toney dispatched a penalty to put the visitors ahead in the 28th minute before laying the ball on a plate for Bryan Mbeumo to double the advantage at minute 34.

Nigeria international Frank Onyeka entered the game as a substitute at the midway point of the second half.

Super Eagles winger Emmanuel Dennis who was making his fifth consecutive start since arriving England headed home the opener in the 17th minute, the Canaries leveled the score through Teemu Pukki on 35 minutes, before a second half brace from Ismaïla Sarr won Watford the points.

Super Eagles assistant captain William Troost-Ekong put in a full shift for the Hornets, Oghenekaro Etebo hopped off the bench in the 82nd minute, nine minutes after Dennis was replaced.

Alex Iwobi was named in Everton’s starting line-up in their 3-1 away defeat against Aston Villa at Villa Park.

Ndidi was on from start to finish and looked to have rescued a point for The Foxes when he headed home from a conner, but his header was ruled out by VAR for offside.

Kelechi Iheanaho only saw 15 minutes of action after coming on as a second half substitute.

Cyriel Desserts came off the bench to his first Feyenoord goal with an assist in their 4-0 win over PSV.

Paul Onuachu scored his sixth goal of the season as he scored in added time to secure a 2-1 win over Sint Truindese in the Belgian league.

A solid defensive display by Kenneth Omeruo helped Leganes secure a hard fought 1-0 victory over Amorebieta in the Segunda Liga.

Defender Chidozie Awaziem was brilliant for his new Turkish league side Alayanspor as they stunned Galatasaray 1-0 in the Turkish Super Ligue.

Taiwo Awoniyi was on for 55 minutes but couldn’t do much as Union Berlin suffered a 4-2 defeat to Borussia Dortmound in the German Bundesliga.

Super Eagles winger Moses Simon was impressive in 66 minutes on the field as he recorded two assist to help Nates beat Angers 4 -1 away from home in French Ligue 1.

Goalkeeper Maduka Okoye was in goal for Sparta Rotterdam as he helped them secure a 1-1 draw with NCE in the Dutch Eredivise.