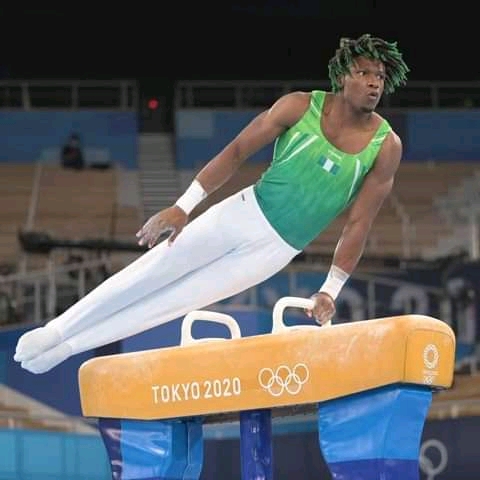 Minister of Youths and Sports, Sunday Dare has offered his words of encouragement and support to Nigeria Gymnast Uche Eke for his brilliant show despite early exit from the Olympics.

Uche Eke failed on Saturday to advance to the All-Around final from subdivision 2 of the artistic gymnastics event at the ongoing Olympic Games in Tokyo.

The 24-year-old, who was making his Olympic Games debut, scored a total of 74.765 points to place 36th at the Ariake Gymnastics Centre.

“Nigeria’s first ever at the Olympics you are a Trail Blazer and a champion. For having the heart of a man, you represent the best of our youth in Nigeria. I saw you compete and even the international coaches were impressed by your mastery and confidence.

“The sky waits for you. You may have lost at the Olympics but you have won our hearts,” added the Sunday Dare.

Uche Eke is Nigeria’s first ever Gymnast at the Olympics.

Also speaking to seven time Olympian, Funke Oshinaike, the Minister urged her to return home and start developing the next generation of young table tennis players in the country.

He said, “Funke’s defeat does not diminish her greatness as an international award winning tennis player who has placed Nigeria on the global map of table tennis.

Nigeria thanks Funke for her service in sports and appreciative of her commitment to tennis development.

He also urged her to help notch new ones who will take over from her and also help keep the country on the world map while also promising government’s support.

“I urge to start to developing the next young generation of Nigerian tennis stars. Government will support her.”

“Funke Oshinaike, seven time Olympian was defeated in her first game playing against the American tennis player who is one of the best in the world.