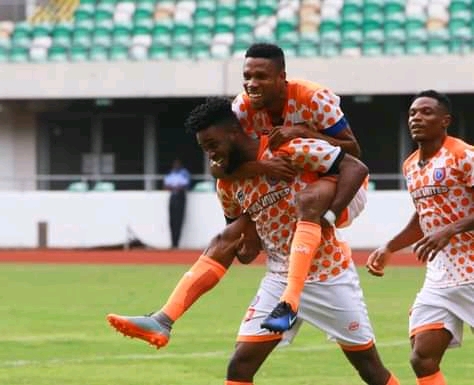 It was a busy day at the Nest Of Champions Uyo which witnessed two huge games in the matchday 30 of the Nigerian professional football league (NPFL) as Akwa United beat Nasarawa United to open up a four points gap at the top of the table, while neighbors Dakkada International in the early kickoff defeated Kwara United 2-0 in to move up to 10th on the log after victory, Owosports.com.ng reports.

First half goal from Godwin Inamoto and a second half header from Emmanuel Charles was all that Dakkada International needed to pull out a resounding win against the Harmony Boys who suffered a setback in their ambition of picking up a Continental ticket.

After last weekend’s defeat to Katsina United Which saw an end to their 18 match unbeaten run, Akwa United capitalized on Kano Pillars loss to MFMFC yesterday, as they beat fellow title challengers Nasarawa United 2-1 to put themselves in pole position for the title.

Samuel Amadi’s brilliant free kick from 20yards gave the Promise Keepers a deserved lead after 30 minutes of football played, Marshall Johnson powered in a delightful header from Etboy Akpan’s conner to give the league leaders a comfortable lead heading into the break.

Adamu Hassan gave the Solid Miners some gilmpes of hope as he reduced the goal tally from the spot in the 77th minutes, but the goal was only good to serve as a consolation as Akwa United held on for a win smiling into the dugout with the maximum points in hand.