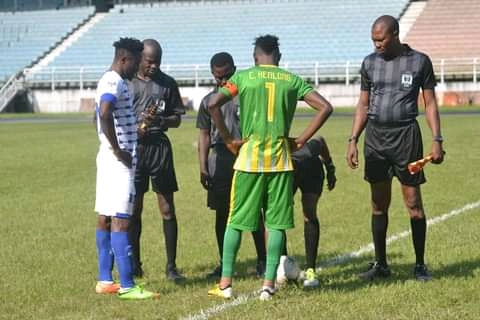 Rivers United moved up to fouth after they recorded a 3-1 victory over Plateau United at the Adioke Amasemaka stadium in Portharcourt.

Godwin Aguda, Malachi Ohawuma and Shedrack Oghali where on target for the home side why the visitors got their consolation through Andrew Ekefe with head coach of Plateau United Abdul Miakaba holding his head high despite the defeat.

“Am not disappointed, some of my players are not available for this game, am satisfied with my players because someone are playing for the first time making their debut in the league, am happy with their performance”, he said.

Meanwhile Rivers United manager Stanley Eguma returned to the dugout for the first time since he was kidnapped earlier this month, he however heaped praise on his players for a job weldone.

“It a good result, I commend the players for their efforts after losing that game in Nasarawa last weekend we had to work harder and re-strategies to get the victory against plateau United who are a very good side”,said the gaffer.

Enyimba International missed an excellent opportunity to move up to fourth after playing out a 1-1 draw with Warri Wolves.

Wolves took a shock lead at the Enyimba International Stadium through David Chimezie
In the 72nd minutes but the peoples Elephant bounced back and got their equaliser through their skipper Austin Oladapo with twelve minutes remaining.

Rangers International came from a goal down to defeat Abia Warriors 2-1 at the Cathedral The Namadi Azikiwe Stadium Enugu.

The Warriors from Umuahia took the lead through Yakub Hammed two minutes before the break, but the Flying Antelopes hit back via second half goals from Christian Nnaji and Elijah Anni.

FC Ifeanyi Ubah thrashed Adamawa United 3-0 in Nnewi to easy their relegation woes with Ekene Awazie, Nnoso Nzediegwu Abel James getting the goals for the home side.

Assistant coach of Adamawa United Festus Morialewe wasn’t pleased with the outcome of the game as fault their late arrival for the heavy defeat.

“We came with the confidence that we could get a positive result here because we’ve been making progress in terms of our performances in the second round we never conceded this number of goals even against the top four teams, we came in late we couldn’t have a walk out before the match and it contributed to the defeat”, said the coach.

“I am not impressed because we lost a lot of chances, for the position we are on the league we are supposed to bury those chances we had, the goals might turn out to be the decider at the end, playing well throwing away almost six clear scoring Chances is disappointing but I am greatful for the victory”, he said.

Sunshine Stars continues to rack up win at home as they look to avoid the drop with Faud Ekeleojuti 54th minutes proved to be vital as they beat Wikki Tourists 1-0 in Akure, With head coach Deji Ayeni pleased to pick up another positive result.