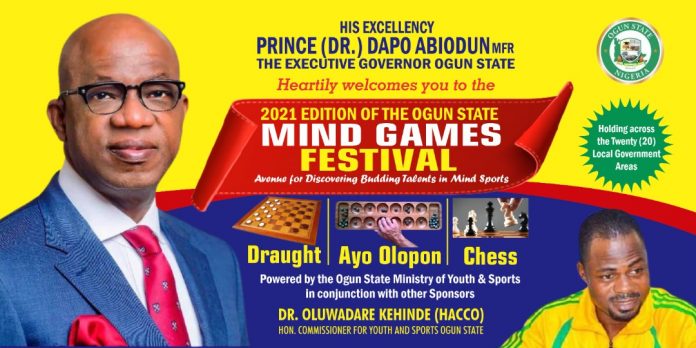 The Conference Room of the Ogun State Ministry of Youth and Sports at the MKO International Stadium was on the evening of Thursday 15th September, 2021 filled to the brim with Journalists from all walks of life for the Press Briefing to Flag off the Maiden Edition of the Ogun State Minds Sports Festival.

The maiden edition of the Game holds between Thursday 16th September and
Wednesday 13th October, 2021 across all the Twenty (20) Local Government Areas of the State. The mind Games available at the Competition are Chess, Opon-ayo, & Draught.

According to the Honourable Commissioner for Youth and Sports, Dr. Oluwadare Kehinde, the competition is
designed not just as a grassroot sports to discover budding talents in Chess, Opon-ayo, & Draught but also as a way to ensure that Ogun Youths build strong analytical minds and a well-defined thought pattern with which they can unlock their hidden potentials.

The Hon. Commissioner also added that it takes both physical strength & invigorated mindset to excel in Sports noting that the sterling performance of Ogun Athletes in the just concluded Tokyo Olympics & Paralympics Games as well as the 20th National Sports Festival are indestructible evidences of the giant strides of His Excellency Prince Dr. Dapo Abiodun MFR in the areas of Sports Development.

While speaking, the Chairman of the Technical Committee, Prince Onatolu maintained that the Ministry of Youth and Sports has been springing forth new initiatives to re-define Youth & Sports Development in the State since the assumption of the Honourable Commissioner in line with the Building-Our-Future-Together mantra of His Excellency Prince Dr. Dapo Abiodun MFR

In her own remarks, the Director of Sports at the Ogun State Sports Council, Mrs. Iyabo Rotimi maintained that the primary aim of the Council is to discover budding talents and nurture them to global
prominence. She enjoined all sport lovers, particularly the teeming Youths to join the competition at their various Local Government Areas.

The 2021 Mind Sports Game will commence on Thursday 16th September, 2021 at the Ijebu Ode Local Government by 11am.

Questions were later fielded by journalists at the Conference on the modalities and the series of awards available at the competition.

In attendance at the Press Briefing was the Permanent Secretary of the Ministry, Engr. Olayiwola Abiodun accompanied by the Directors of the Ministry and the Sports Council.

SCHEDULE OF MIND GAMES IN ALL TWENTY (20) LGAs: