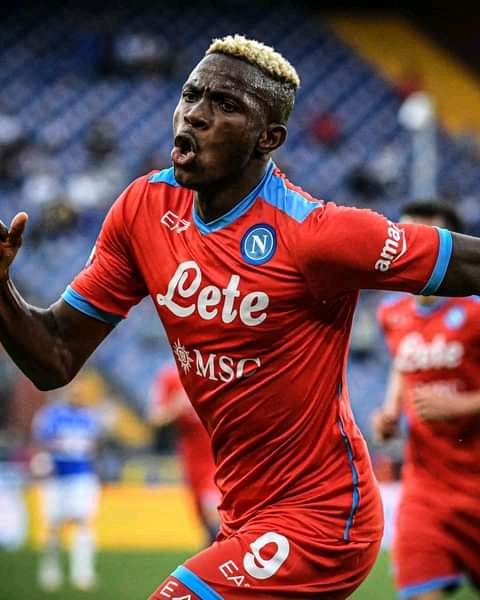 Osimhen brilliant goal scoring form has not gone unnoticed as the Nigerian has now reportedly caught the attention of top European clubs with Real Madrid, PSG, and Chelsea keeping tabs on the Napoli striker as a potential transfer targets next summer, Owosports.com.ng reports.

According to en.as.com, Real Madrid have reportedly identify the Nigerian striker as an alternative should they fail to land Kylian Mbappe next summer.

Real Madrid’s tops priority transfer target is Kylian Mbappé, The Paris Saint-Germain striker, who was the subject of an unsuccessful Madrid bids in the summer, remains at the top of Los Blancos’ wish list and, if everything goes to plan, will arrive at the Bernabéu on a free transfer at the end of the season.

However, PSG are pushing hard to persuade the France striker to renew his contract, and will do so right to the last, mindful of this, Madrid are working to line up alternatives if their pursuit of Mbappé doesn’t come to fruition.

Madrid among a host of European big guns eyeing Osimhen
One name on Madrid’s radar is Napoli’s Victor Osimhen, who has been one of Serie A’s best players so far this season.

The Nigerian international has scored six goals and supplied one assist in six games in all competitions in 2021/22, figures that place him among the most effective strikers in Europe.

“Indeed, he has registered the continent’s joint-best goalscoring record in September, together with Real Madrid’s Karim Benzema. Napoli are delighted with Osimhen’s performances and certainly aren’t regretting the 70-million-euro fee they spent to sign the 22-year-old from Ligue 1 champions Lille in summer 2020.

However, the Partonepei may not get to enjoy his exploits for the club beyond this season, as Osimhen’s displays have sparked interest among a number of top European clubs, including Real Madrid.

According to La Gazzetta dello Sport, Chelsea, Manchester United, Manchester City, PSG and Madrid are all keeping tabs on the FIFA U17 Worldcup all time top scorer.