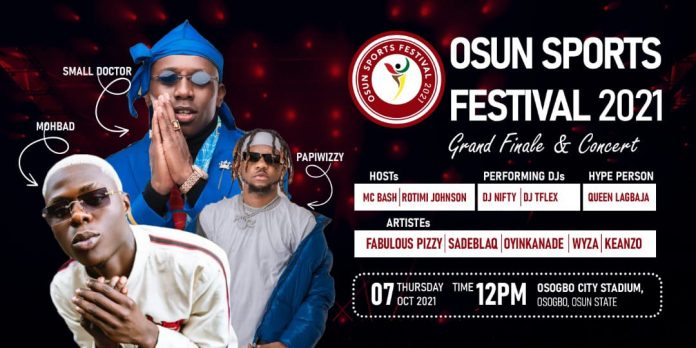 Osun sports fans most especially those in Osogbo the state capital, will witness an evening to remember as Nigerian Fuji, Afro-Pop recording artist and performer Adekunle Temitope, better known by his stage name Small Doctor and others will storm the grand finale of the Osun Sorts Festival.

The Osun Sports Festival blueprint introduced by the  Commissioner for Youth and Sports, Yemi Lawal and had 31 sporting events for the fiesta that will cut across the state.

It won’t be a thing of ‘Oti gba penalty losi throwing’ as Small Doctor confirmed the news.

In a short video, he posted on social media sites, assured his fans that he will be live on stage after he said from ‘Agege to Osogbo’

“Ain you can call me Small Doctor Omo Iya Teacher. To my fans, I will be live at the finale of the Osun Sports Festival on Thursday October 7th. Let’s catch fun, Agege nbo losun Iyanu ma sele.”

The event which is billed for on October 7 is tagged Osun Sports Festival Grand Finale and Concert and will see other artists like Mohbad, Papiwizzy, Bash the comedian, Do T Phlex,  Fabulous Pizzy, Sadeblaq, Oyinkanade, Wyza, Queen Lagbaja, Baba Alariya, Do Nifty and Keanzo live on stage with the duo of disc jockeys Nifty and TFlex as performing djs why Hype Person is Queen Lagbaja.

It would be recalled that Honourable Lawal  extolled Governor Oyetola for creating an enabling environment for youths in the state as well as approving state sports festivals which is the s first of their kind since the creation of the state while various committees have been set up immediately.