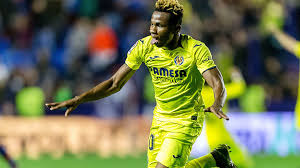 The Nigeria international was instrumental for Villarreal Europa league success, but missed the final after suffering a groin injury in the second leg of his side’s semi-final victory over Arsenal.

Chukwueze has enjoyed lots of transfer rumors linking him with a move to the Premier League in recent years with both Manchester United, Chelsea and Liverpool reportedly being on the card for the Nigerian.

However, according to the Athletic, Everton have now indicated interest for the highly rated winger but they will have to fork out a hefty price for Chukwueze who has a whopping £71million release clause in his contract which doesn’t expire until 2023.