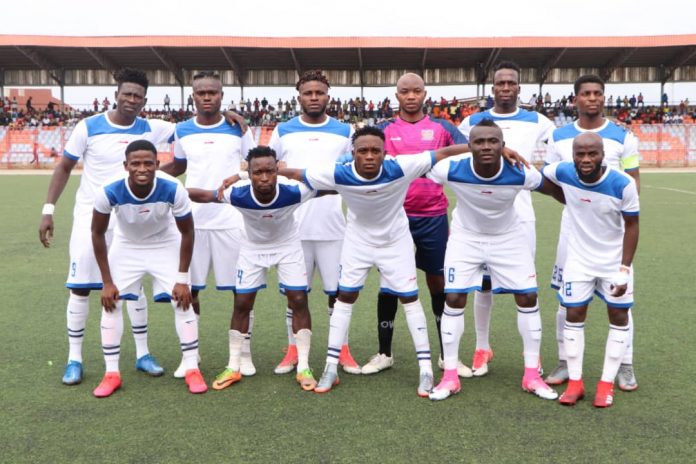 Sunshine Stars have secured topflight football for next season after fighting tenaciously till the end in a very challenging 2021/2021 NPFL season.

The Akure based side put a stamp on its NPFL status on the final match day with a 1-0 win over Rivers United at the Ondo State Sports Complex on Thursday.

Man of the match, Ejike Uzoechi proved decisive again, scoring the only goal of the game as early as the fifth minute from a corner kick, to take his tally to four goals in his abriged debut season with Sunshine Stars.

Twelve minutes after heading the Deji Ayeni tinkered side in front, Ejike went close again with a another header over bar, moments after Ibrahim Ajani also tested Theophilus Afelokhai.

Rivers United also had a glancing header which went inches off target in the 35th minute, before Uche Okafor saved from another freekick to keep the hosts’ lead into the break.

The second half was more about control for Sunshine Stars, as results from other match centres and ruling of points deduction against main relegation rivals, Jigawa GS ensure safety was never in doubt.

Second half substitute, Kolade Adeniji went close with a low drive in the 69th minute, just as Waheed Adebayo almost beat Afelokhai for a second in stoppage time.

Ejike’s lone header proved enough as Sunshine Stars clawed a place above the relegation with 45 points in a season they had an alarming sequence of 18 matches without win.

“Every individual should have a positive mindset. I studied the log when I took over and realised we had 14 matches left, believing if with 23 points we should be safe and today we have 24 points.

“I give thanks to the Ondo State Government and other stakeholders for the support given the team It can only be God and not me; like I said when newly came in: it is not the David that killed Goliath but the person behind him.”