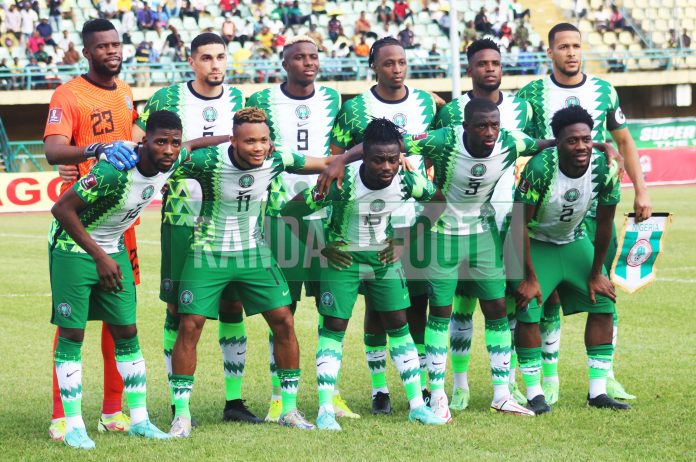 The delegation of Nigeria’s Super Eagles to Sunday’s FIFA World Cup Qatar 2022 African qualifying encounter against the Les Fauves of Central African Republic landed at the Aeroport Internationale Douala at 11.28am on Saturday.

Led by NFF 2nd Vice President/Chairman LMC, Mallam Shehu Dikko, the delegation comprised of 23 players, technical officials and backroom staff, some NFF Board Members and Management, a couple of parliamentarians, a number of stakeholders and few media representatives.

The Air Peace aircraft that flew the delegation to Cameroon’s industrial capital was making its first commercial flight since it was acquired by the leading airline company.

At the airport in Douala to receive the contingent were the High Commissioner of Nigeria to the Republic of Cameroon, His Excellency Gabriel Abayomi Olonisakin and the Consul-General to Douala, Mrs Efe A. Clark-Omeru.

The three –time African champions have been scheduled to have a feel of the Stade Japoma de Douala (venue of Sunday’s game) by 2pm Cameroon time (same time as in Nigeria) on Saturday.

Skipper Ahmed Musa, who is looking forward to earning his milestone 100th cap for Nigeria at senior level, says he is more concerned with the Super Eagles taking all three points in the Day 4 encounter.

“I’m happy that I am about to win my 100th cap, which definitely is a thing of joy and pride for any football player at international level. However, I am more concerned about the three points. The three points here have become much more precious due to what happened in the first leg which we lost. The individual honour is welcome but I am more concerned about collective glory and our country’s pride.”

Karl Namnganda scored a stoppage –time goal off a defensive slip to hand the three points to the Les Fauves when both teams clashed at the Teslim Balogun Stadium, Lagos on Thursday evening.

Nigeria remain top of the Group C of the qualifying campaign at the halfway mark with six points, two more than Cape Verde and Central African Republic, with three-pointer Liberia bottom of the table.