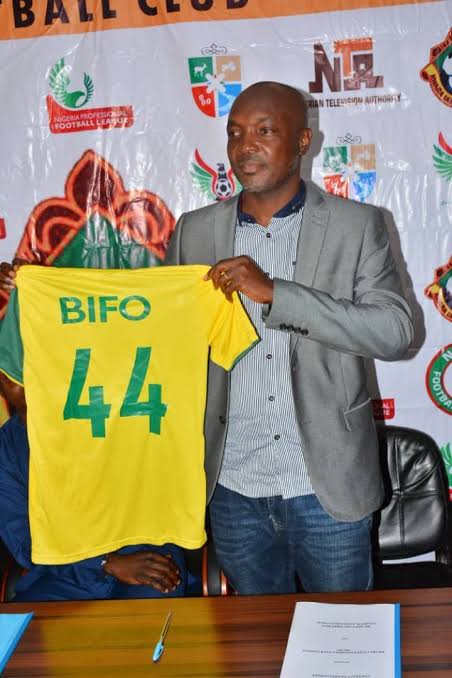 It was a good start for Kwara United as they beat Manchester FC, Ilorin 3-0 in their first friendly match as teams resume action across the country.

Coach Abdullahi Biffo led side had recorded two goals from the spot in the first half of the game courtesy of Stephen Anyanwu and Micheal Ohanu before the  Brazilian attacker, Lucas Ribiero Alves hit the net to make it 3 for the Harmony Boys in the second half.

Reacting after the game, Biffo, who noted there is still a lot to do  lauded his boys performance for being able to compose themselves adding that positives and negatives from the game has been noted for a better subsequent approach.

“I think we played our last match in march this year, and during the first half of the encounter today,; team composed them selves very well .Through this match, we discovered a lot mistakes from the team and we will try to work on it before another friendly match on Saturday” he said.

In a match that was wholly dominated by the by the team, former Niger Tornadoes gaffer  pointed out that the essence of friendly matches is not the amount of goals scored but to help build the team for the ultimate goal as saying there is no a perfect team.

He further assured a solid team that will compete for laurels in the coming season in view of the combination of old and new players expressing their readiness to explore all the available potentials.

Speaking of the new Brazilian signed player, he revealed that Lucas is a good addition to the team whose quality will definitely be proud of if he is given the time to adapt to his new environment.

He is a significant addition to our team (and) not only because  a foreigner or a good player, and you know that doesn’t play the game alone , you need to give him time to adapt to the environment and the people. He is just coming from his comfort zone but if you give him time to adapt very well, I think we are going to see the quality from him”.

As the team also prepares for Ogunjobi Gold Cup tourney which will hold in ilorin from 11th of November, Biffo argued that the essence of pre season competitions is to test all the players in order to scheme a definite approach for the season ahead whil weighing all the options on the table.

“The target of the team is not win the Gold cup. it is just to blend the team together in order to see as many as mistakes the team will likely make during the league so that we will be able to correct them before the league proper because that is the essence of playing in the pre- season”.

He further stated all the players will be given the opportunity to show what they are made of during the course of the pre- season engagement with a view to achieve the desired results.