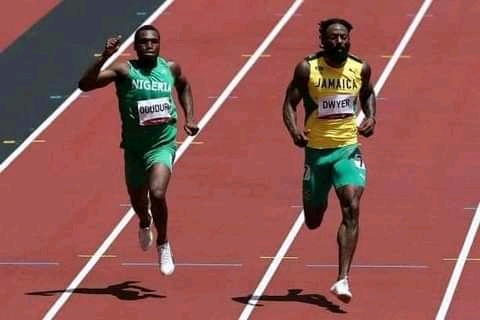 Sprinter Divine Oduduru, has qualified for the semi-final of the men’s 200m at the Tokyo 2020 Olympics, Owosports.com.ng reports.

He finished second in 20.36sec behind Jamaica’s Rasheed Dwyer who won in 20.31sec.

Shaunae Miller-Uibo won the heat, jogging towards the line to finish in a time of 50.50sec while Cuba’s Roxanna Gomez ran a Personal Best of 50.76sec and Sada Williams emerged third in 51.36sec.

Oduduru was earlier disqualified from Heat 5 of men’s 100m for a false start.

The 24-year-old timed 20.18 seconds in what was little more than a gentle warm-up for the semi-finals later on Tuesday.

Bednarek, 22, said he felt the US could sweep the medals but added he had to keep his nerves under control.

The American trio may not have things all their own way with 2016 Olmypic silver medalist Andre de Grasse aching to finally get his hands on a gold medal after he won a second successive 100m bronze on Sunday.