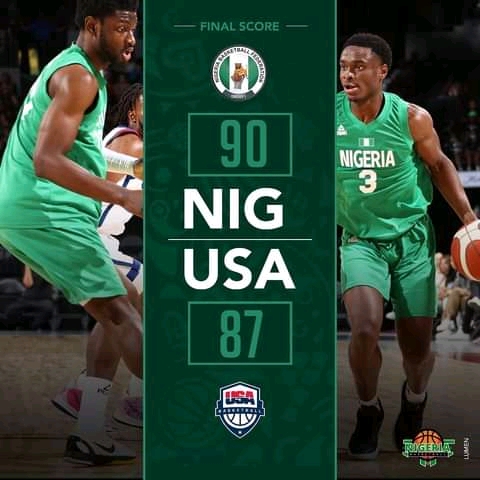 The Nigeria’s Men Basketball team D’TIGERS, bagged an incredible victory over basketball powerhouse the United States of America in a tune up game played in Las Vegas on Sunday morning ahead of the 2020 Olympic Games in Tokyo, Owosports.com.ng reports.

Point guard, Gabe Vincent, Caleb Agada and forward Precious Achiuwa were the stars for the Nigerian team who recorded a first win over the World number one ranked team.

D’Tigers head coach, Mike Brown, has named a provisional 15-man squad for the Tokyo Olympics with captain Ike Diogu a stalwart of the team in the last 10 years missing in the team.

Nigeria will lock horns with heavyweight Italy, Australia and Germany in group B of the Tokyo Olympics Basketball event due to kickoff later this month.