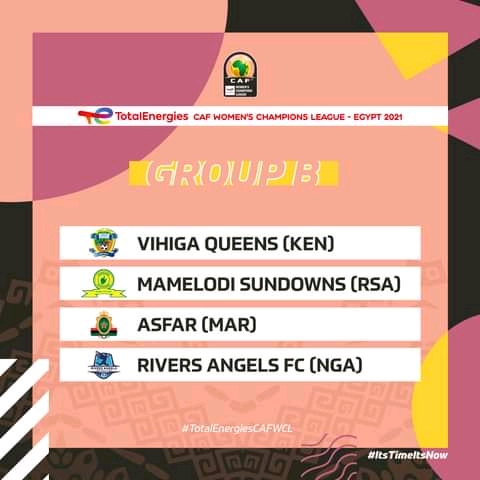 Rivers Angels FC of Nigeria have been handed a tough draw ahead of the maiden
TotalEnergies CAF Women’s Champions League which will go down from 5th – 19th of November 2021 in Caro Egypt, Owosports.com.ng reports.

The draws which was held on Wednesday 29th September 2021 in Caro Egypt saw the eight participating teams divided into two groups of four teams in accordance with the regulations.

Rivers Angels was paired in Group B alongside MAMELODI SUNDOWNS of (South Africa), ASFAR of (Morocco), and VIHIGA QUEENS of (Kenya).

WADI DEGLA of (Egypt), AS MANDE of (Mali) MALABO KINGS of (Equatorial Guinea) and HASAACAS LADIES of Ghana will do battle in Group A.

Rivers Angels will kick start their campaign against ASFAR of (Morocco), while the Kenya Women’s Football League Champions Vihiga Queens will go head to head against Mamelodi Sundowns of South Africa.

In Group A, hosts Wadi Degla FC, twelve times Egyptian champions and AS Mande three-time champions of Mali will trade tackle, Malabo King’s FC, of Equatorial Guinea League and Hasaacas Ladies FC will play in the other Group A opening day fixture.

The draw ceremony was graced by four times Africa Women’s footballer of the year, Perpetua Nkwocha,

She was joined by Alia Zenouki who plays for Egyptian club Wadi Degla FC.