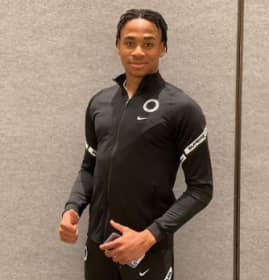 The Nigeria Football Federation have announced via their Instagram page that Tottenham Hotspur U-23 goalkeeper Joshua Oluwayemi has linked up with the Super Eagles bearly twenty-four hours before the Super Eagles International friendly against CONCACAF powerhouse Mexico.

“Update! Tottenham Hotspur shot stopper, Joshua Oluwayemi is in camp now ahead of the international friendly match against Mexico at the Los Angeles Coliseum,” the Super Eagles Media team stated.

Despite having caps for the Young Lions at U15 and U16 levels, Oluwayemi, who has a Nigerian dad, was able to join the Super Eagles squad because the Nigerian Federation fast-tracked national exempt papers for the Tottenham Hotspur starlet.

The 20-year-old is competing with home-based duo Stanley Nwabili (Lobi Stars) and John Noble (Enyimba FC) for a starting shirt against Mexico, a tall order for him considering that he recently arrived camp.