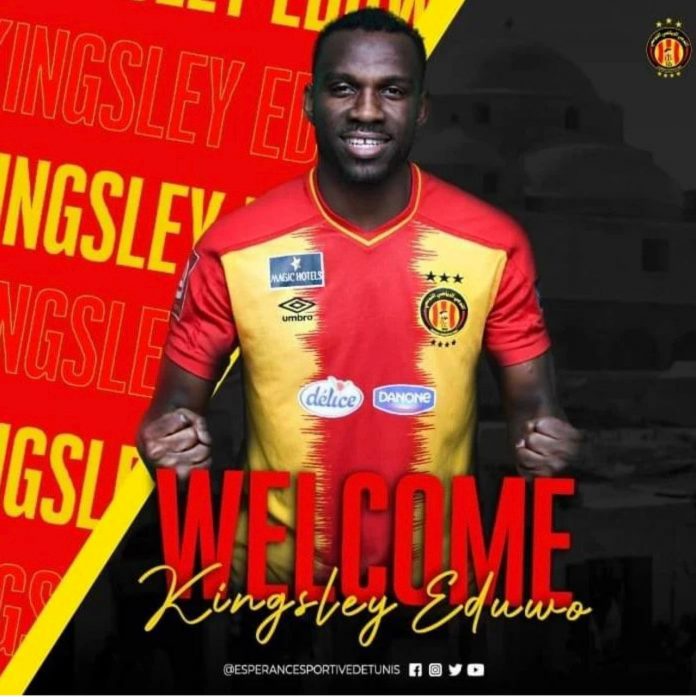 The former Lobi Stars striker arrived Al Arooba six months ago from Tunisian side CS sfaxien where he earned 48 appearance scoring ten goals in all competition between 2017-2021, however during that period he was sent on loan to Iraqi Premier League club Al-Najaf where he scored twice in 13 appearance.

The club in a statement via their twitter account confirmed that the striker has penned down a two and half year deal with the club.

“Espérance recruits striker Kingslay Eduwo?? who played for the Emirati club of Al Urooba (and CSS). Duration of the commitment 2 and a half years.

The striker who has had two caps with the Super Eagles B team will teem up with compatriot Anayo Iwuala who joined the Tunisian heavyweight last summer from Nigerian giant Enyimba FC.

The elated striker described the transfer as a big move for him, “I’m so excited moving to Tunisian giant Esperance, it’s a very big move for me”, he said exclusively to www.owosports.com.ng.

“Esperance tried to signed me before I moved to Emirate, now I’m here to add value to the team and promise to make it worthwhile stay here in the city of Tunis”, he added.

He scored five goals and assisted four in 15 appearances in the colors of Al Arooba in his short spell with the club.

The 25-years old began his football journey with Gateway United in 2012, also had stints with other Nigeria Professional Football League sides including Sunshine Stars and Lobi Stars before leaving for Tunisia in 2017.