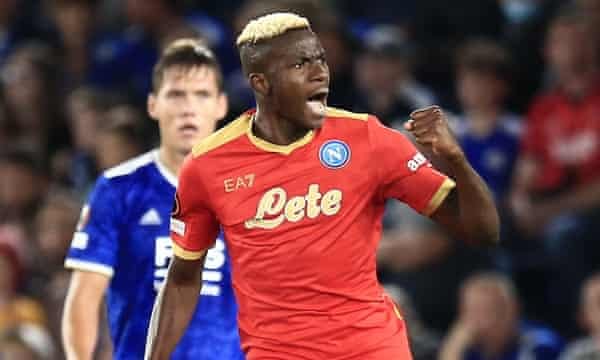 Victor Osimhen scored twice on Thursday night for his Italian club Napoli as they forced Leicester City to a 2-2 draw in their Europa league Group opener at the King Power Stadium.

The performance however didn’t go unnoticed as it has earned him nomination for the UEFA Europa league player of the week award after being nominated by UEFA alongside three others.

Osimhen stole the show as he outclassed compatriots Kelechi Iheanacho and Wilfred Ndidi who was sent off late on following two bookable offense, by scoring two goals to secure a point for the Italian Serie A side.

He was on Friday nominated for player of the week by UEFA alongside Juanmi of Real Betis, Declan Rice of West Ham, and Mario Gotze of PSV.

Fans will determine who wins it as they’ve been asked to vote for the player of their choice starting from Friday.