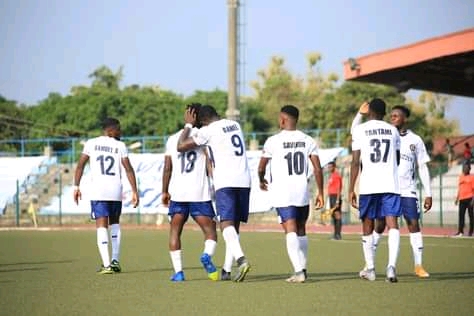 Vandrezzer FC continued their impressive form with a 2-1 victory over Rovers FC in a rescheduled match day 19 NNL fixture on Thursday at the Soccer Temple.

Two early goals from Amos Okoro and in form Kolawole Daniel ensure VFC secured three points in Lagos, despite a second half penalty by the visitors.

The Lions of Naija started the game showing intent and desire from the blast of the whistle and were rewarded with a well worked opening goal inside 2 mins.

The move started with a short freekick by Anietie Uko after Samuel Akere was fouled just before the centre circle, Uko played a pass to Saheed Obisesan who then played a sharp pass to Kola Daniel, the striker flicked the ball to Akere Samuel who played a nice pass to the path of Amos Okoro to poke it past the onrushing goalkeeper.

Shortly after, Daniel had a clear opportunity in the sixth minute to increase the lead after full back David Mark’s inch perfect cross found the striker at the far post, but his effort was blocked by the goalkeeper for a corner kick.

The second goal came in the 12th minute with VFC dominating play, building nicely from the back before the ball was received by Anietie Uko in midfield who then played a through pass to the overlapping Mark, the full back whipped in a first time cross to the far post and this time, Daniel made no mistake to put it in the back of the net to make it 2-0 and increase his tally for the season to seven.

Daniel had a chance in the 28th minute to increase the lead for VFC after a mix-up between Rovers goalkeeper, Isa Ismaila and his defenders, the ‘Bull’ found himself with the ball but his shot was blocked off the line by a Rovers player.

Rovers came out in the second half determined to get back into the game and hit the woodwork in the 50th minute. Samuel Edoho was dispossessed in our half before the attempt which was pushed to the cross bar by goalkeeper Paul Emenike.

At the other end, Kola Daniel set up Uko on the edge of the box but the midfielder’s shot went just wide off target.

Rovers FC came back into the tie when the away side’s pass hit the hand of Daniel Segun in the box for a penalty which Daniel Ilevbare scored from the spot to make it 2-1 in the 59th minute.

Saviour Isaac had an attempt in the 75th minute from outside the box which was well saved by Rovers Ismaila.

Uko was found on the edge of Rovers penalty area by Mark’s corner kick and his effort went wide of the target in the 82nd minute.

Saviour Isaac had another attempt in a swift counter attack by Kola Daniel but his well timed shot hit the woodwork as VFC controlled the remaining minutes of the game.

The result sees VFC move up three places to joint 5th with Delta Force and Nnewi United, ammasing 26 points from 19 matches and on course to finish the season strongly.

VFC will entertain Nnewi United on Sunday, July 4, 2021 at the Soccer Temple.