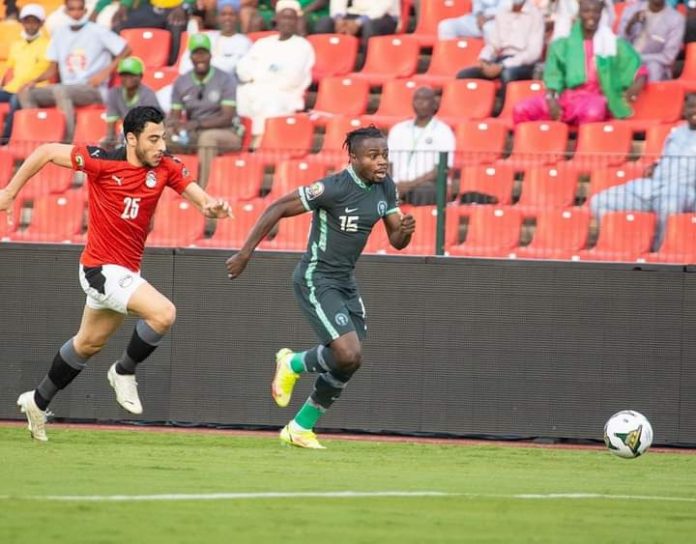 Super Eagles winger Simon Moses has sent in a message to Egyptian Defender, Aram Tawfik who’s tournament is over after he sustained an injury in a challenge with the Nigerian attacker in their African cup of Nations (AFCON) Group D opener on Tuesday, Owosports.com.ng reports.

The Al Ahly defender who made his debut against Nigeria before suffering the injury early in the game, will miss the remainder of the tournament after a scan revealed he has torn his anterior cruciate ligament (ACL), the Egyptian Football Association, EFA have confirmed.

The EFA said on Wednesday “Scans revealed that Tawfik is suffering from a torn anterior cruciate ligament and the player will return to Cairo.”

Tawfik was replaced by Mohamed Abdelmoneim in the 12th minute as the North Africans bowed 1-0 to Eguavoen’s men at the Roumde Adjia Stadium in Garoua.

The injury is a huge setback to the Egyptians who are hoping to win a record eighth African diadem in Cameroon.

“I just want to wish the Egyptian defender Aram Twafik a quick recovery, please stay strong, all the best, cheers”, Moses said a short video from the Super Eagles media.

A 30th-minute effort from Kelechi Iheanacho was all Nigeria needed to grab all three points over the Egyptians on Tuesday.

The second round of matches in Group D will resume on Saturday, as the Super Eagles of Nigeria will be looking to seal qualification for the second round when they face off with Sudan, while Egypt will face Guinea Bissau in a must win the second Groups D match.