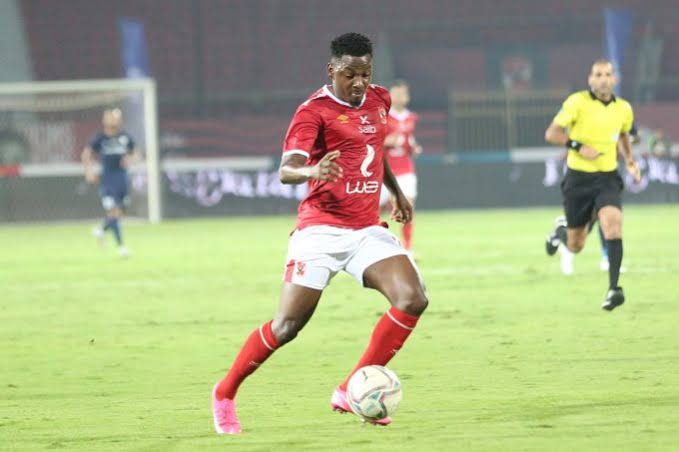 It appears that the five-year marriage between Junior Ajayi and Al Ahly has come to an end after he was deemed surplus to requirement by coach Pitso Mosimane.

The ex Shooting Stars striker is contracted to Shot until June 2022.

Ahly and forward’s management haven’t come to agreement on his compensation fee with the case gradually getting messy.

A media outlet reportedly stated that: “Ajayi asked for the value of his entire contract, which is estimated at $850,000, after Pitso Mosimane’s decision to dispense with him.”

“The club’s management is ready for all scenarios in dealing with the Ajayi crisis, whether if he complains to FIFA or agrees to an amicable solution and termination of the contract Al-Ahly’s administration offered him $400,000 in installments, but he refused and contacted a lawyer to obtain the full value of his contract from FIFA.

“This last offer is not for fear of filing a complaint against the club because the club’s position is sound, especially since the waiting list was drawn up by the Egyptian Football Association.”

A close confidant of Ajayi denied the rumours going around and stated that Junior wasn’t well respected by the Egyptian Premier League giants.

According to him, nothing has been offered by the reigning CAF Champions League winners to Ajayi’s management.

“Ahly already have their plan without Junior Ajayi for the 2021/22 season,” the source told the Media on Thursday.

“The problem is that the boy wasn’t well respected. In football, player and club is one of those beautiful marriages that doesn’t last for long.

“The whole process should be open and not shrouded in secrecy. This is a player well loved by the fans. He deserves better,” he continued.

“It has been five great years of joy and trophies for Junior and Ahly. Junior was a wonderful boy who metamorphosed to a responsible husband and great father of two boys.

“I can categorically inform you that nothing has been offered to Junior by Ahly. Lawyers are handling the case and you should get an update in a couple of days,” he added.

After Al Ahly signed African duo Percy Tau (South Africa) and Luis Miquissone (Mozambique), they needed to release two of their foreign players to respect the EFA’s regulations, which allows only five foreign players per team.

The Red Devils therefore put Junior Ajayi on their list of players surplus to requirement after Pitso Mosimane signed his boys.

Ajayi signed for Al Ahly in 2016 from Tunisia’s CS Sfaxien, after having won the Olympic bronze medal with Nigeria.

The 25-year-old hit the ground running in his first season with the Reds, scoring 12 goals and providing seven assists in 39 games across all competitions.

He kept his form for the majority of his stay in Cairo, making a total of 161 appearances and lifting 11 trophies along the way. These titles include four Egyptian Premier Leagues, two Egypt Cups, two Egyptian Super Cups, two CAF Champions Leagues and the CAF Super Cup.

Highly rated Ajayi won’t be short of offers as he has been recently linked with Zamalek and Pyramids.

A couple of clubs in Europe and Asia are also interested in the 36 Lion product.