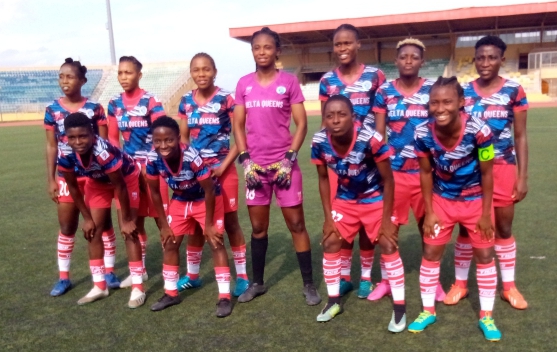 Delta Queens edged their noses in front through Agoh who rifled home a superb free kick on six minutes.

The former league champions kept pressing the minnows and were rewarded before the half hour as Mercy Omokwo beat her marker before sending a low cross to the grateful Agoh who side footed it into the back of the net.

Skipper of Delta Queens, Racheal Okotette who dominated the middle of the park registered the third goal with ease.

It was 3-0 at the break with the Tosan Blankson managed team the better side.

Two minutes after the break, Agoh got a well deserved hattrick after she finished a team move. The striker turned Oliver Twist and wanted more.

In the 55th minute, Agoh got on the scoresheet again for Delta Queens.

Energetic winger Peace Abbey injected pace to the game when she climbed off the bench.

There was quick fire goals for Delta Queens within one minute though Agoh and Esther Nyang.

Teenage sensation Taiwo Afolabi curled the ball past the Castmog FA keeper for the 8th goal of the game.