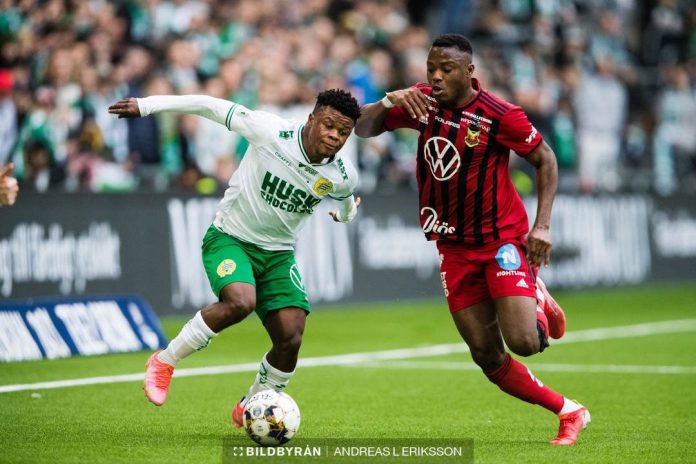 Nigerian midfielder Akinkunmi Amoo took his goals tally to eight on Sunday afternoon as he scored one and assisted another as he helped his Swedish side, Hammarby to a comeback 4-3 win over Ostersunds FK.

Having scored the winner in their last league outing at home against AIK, the fleet footed player started his 15th league match with the host hoping to close the gap on first place Djurgarden to seven points.

The hosts were however stunned with just 14 minutes on the clock as the visitors took a two goal lead courtesy of strikes from Marco Weymans and Blair Turgott.

Moments later Noah Sonko put through his own goal to make it 1-2, but the visitors restored their two goal lead four minutes later as Ludvig Fritzon made it 3-1 against the run of play.

Amoo then reduced the deficit for Hammarby midway through the half as he skipped past two markers before setting up Williot Swedberg to make it 2-3, a lead the visitors held at the break.

The host then had the chance to level scores twenty minutes from time but captain, Darijan Bojanic saw his penalty hit the upright, before his blushes were spared seven minutes later when Gustav Ludwigson equalised to make it three all.

With the game almost certain to end a draw, attacking midfielder Amoo stepped up with a big heart to convert the winner from twelve yards, with the host roaring to victory at the sound of the final whistle

The goals took Amoo’s goals contribution tally to 12 (8 goals, 4 assist), whilst Hammarby earning their 11th win of the campaign to keep them still in contention for both the league title and a European spot.