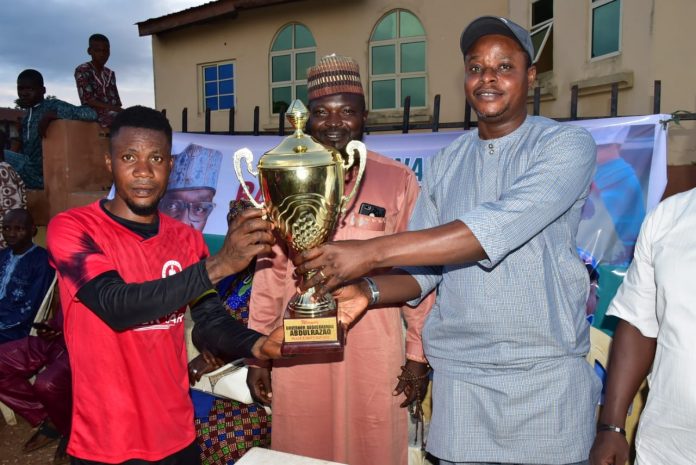 Irra FC have emerged champions of the 2022 Governor AbdulRaman AbdulRazaq Peace and Unity Cup after they beat Iyekun FC 3-1 in the final on Tuesday evening.

Waisu Kuta, Abdulakeen Oselu and Shigaba Joseph where amongst the goals for Irra FC while Muideen Sheriff netted the consolation from the spot for Iyekun FC in the final played at the St Peter primary school Ira Oyun Local Government Area of Kwara State.

The competition which lasted for five days was organized by the General Manager of Kwara United football club Bashir Badawiy in other to raise support for Governor AbdulRaman AbdulRazaq second term bid.

It was an entertain finale which ended goalless at halftime, early in the second half Waisu Kuta headed Irra FC into the lead, Abdulakeen Oselu increased the goal tally thirty minutes into the second half, Muideen Sheriff netted a late consolation from the spot to cause a late scare as Iyekun FC pushed for an equalizer but Shigaba Joseph netted a stoppage time screamer to restore Irra’s two goal lead as they went on to clinch the trophy.

Speaking aftermath of the game was the chief organiser of the tournament the General Manager of Kwara United Bashir Badawiy who expressed his satisfaction at the quality of football exhibited by the the two teams.

“Good game, good fight from the two sides, I am always impressed anytime I come home to organize a competition like I said we have so many Rasheedi Yekini that can be discovered in Irra Kwara State”, he affirmed in a chart with Journalist.

“The last time we hosted this competition there was a boy we discovered I told Shehu Dikko about the boy who is now base in Kaduna, a fantastic player. I have now discovered more players today.

He further revealed that the competition has to stay adding that he will his best to host a better competition next year.