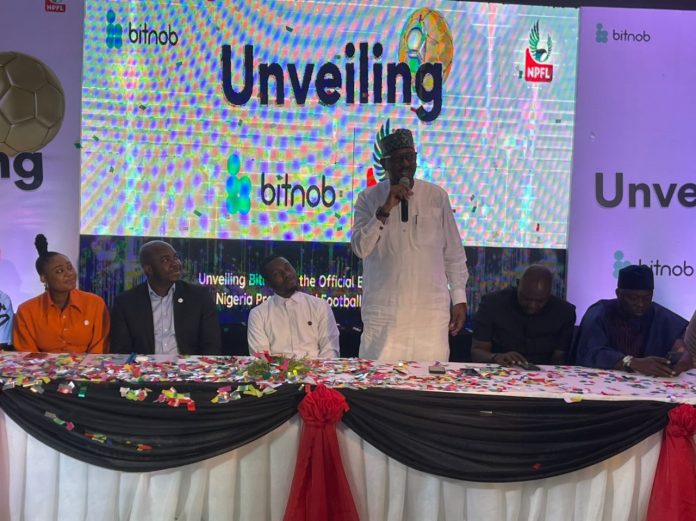 Bitnob, a company on a mission to redefine how financial services are built and delivered leveraging the bitcoin network, has signed a multi-year partnership with the Nigerian Professional Football League (NPFL), managed by the League Management Company (LMC) as an Elite sponsor, making it the exclusive Fintech partner for the league.

Bernard Parah, the CEO of Bitnob said the partnership is a vehicle to reach the people who need their solutions in business and wealth creation and at the same time provide the company the opportunity to contribute to the development of the domestic league which is a national asset.

According to Parah, “this partnership takes us to the people that need our solutions and helps us work with the NPFL to develop our league for more possibilities. Bitcoin, just like football, is about hope, oneness, and freedom, and at Bitnob, we are excited to be making this happen to inspire hope and showcase possibilities in our own league. If we don’t believe in what is ours, then who will?”
Bitnob has established itself as a trailblazer and a company that sits at the cutting edge of leveraging bitcoin to solve everyday problems. On her website, Bitnob says one of its core values is crazy, and that means they think limitless, break barriers and do the impossible. With this partnership, Bitnob further strengthens this core belief by going where no one else in their industry has gone.

After signing the contract, Chairman of the League Management Company (LMC), Shehu Dikko described the partnership as a marriage of football and technology which is critical to the next phase of global football.

“We are excited to see young minds choosing to invest in the growth and development of our domestic league. Football is a major passion point in the country, and we believe that the marriage of football and technology is critical to the next phase of football in our nation,” says Dikko.

In 2021, Bitnob achieved some groundbreaking feats, such as pioneering in Africa the lightning network, a layer 2 bitcoin protocol that enables instant and almost free bitcoin transactions for everyday monetary exchange.

Also, Bitnob was the first company in the world, partnering with Bitwage, to process the world’s first bitcoin payroll on Lightning and was the only African Bitcoin native company to appear at the largest Bitcoin summit in the world in Miami earlier this year.