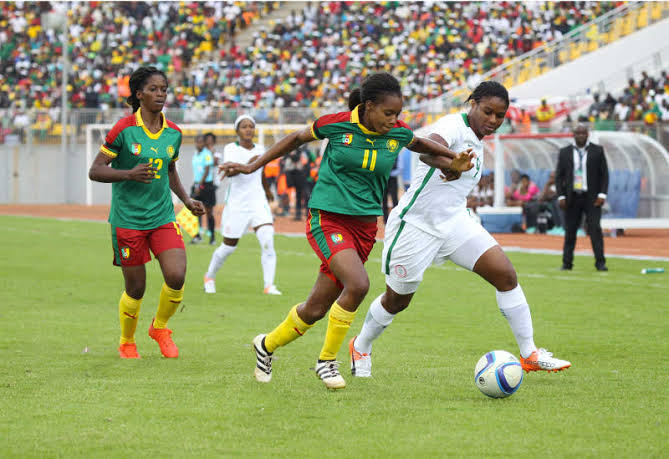 The 2022 CAF Women Nations Cup (WAFCON ) has progressed to the next stage with some teams eliminated, while defending champions the Super Falcons of Nigeria alongside seven others qualifying for the quarter final of the tournament.

The Super Falcons in one of the quarterfinals paring will square up against rivals the indomitable Lionness of Cameroon, are fired up and ready for the challenge against Cameroonian ladies.

Captain Onome Ebi believes they are ready for the challenge ahead of them stating that the Cameroonians will not stop their ambition of playing at the World Cup.

“We know the big task ahead of us and we are ready for the challenge”, she said in press conference as they look forward to Thursday’s quarter final matchup.

A win against the Indomitable Lionness in Casablanca would land the most successful African women national team a place in the semi final for the twelves times and as well guarantee them a spot at the 2023 FIFA women’s World Cup in Australia/New Zealand.

Randy Waldrum side can boast of a superb record against the Indomitable Lionness in the past competition going back memory lane in 1988 where they spanked Cameroon 6-0 in the women’s African cup of nations which was hosted by Nigeria, they were also thumped at the 2010 edition of the WAFCON in South Africa by beating them 5 – 1 at the tournament.

Both sides have also contested in the final on two occasions in 2014 and 2016 Women’s AFCON, the Super Falcons emerged victorious on both occasion, 2014 in Windhoek, Namibia where they ran away with a 2 – 0 victory to lift the trophy for the seventh time and in 2016 in Yaounde , the Lionness suffered a heart break in front of their cheering fans when Desire Oparanozie scored a late goal to hand the trophy to Nigeria for the eighth time.

Tomorrow the Super Falcons will look to continue the dominance when they square up against the indomitable Lionness, while the Cameroonians who have on an impressive form in their last few games will be gunning for the kill as they look ready to take up the challenge against the Super Falcons.

As rightly said by captain Ebi that they are up for the challenge, the fans we be hoping to see them replicate what they did against the Burundi sides and qualify for the semi- final which will end them an automatic ticket to the 2023 women’s world cup in Australia and New Zealand next year.

Here are the Quarter-Finals fixtures!