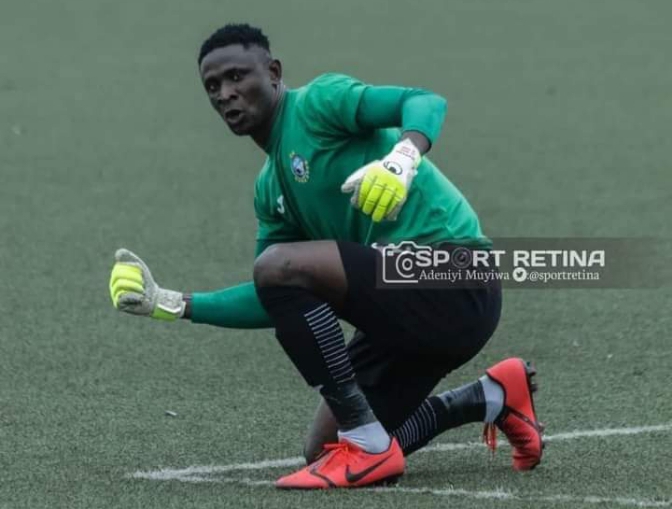 He guessed right, saved two kicks and went over to take his, this is a big moment for him, his club and fans. Fatai Osho could not watch, he leaned his head backwards and prayed.

The goalkeeper took the burden and scored, right in front of the National Team coach, Gernot Rohr. He could not contain his joy, fans screamed their lungs out and yes, he did a noble job that was a big moment for John Noble, scoring the winner for Enyimba against Rivers United in Port Harcourt and sending the People’s Elephants to the group stages of the CAF Confederation Cup.

There and then, his Super Eagles journey began, Gernot Rohr had seen enough. The news of his invitation was a sensation for millions of Enyimba fans around the world, the Enyimba safe hand would go ahead to get brilliant reviews from Super Eagles coaches.

As it stands, Noble is NPFL’s most famous Super Eagles goalkeeper and that did not come by fluke. As a confirmation of the coaches’ trust in his abilities, he was taken to the Africa Cup of Nations and was on the bench in one of the games, ready to fill the void if need be

As the country begins another journey to return to the Championship for African Nations (CHAN), Noble is poised to help the team return to the tournament where they have won bronze and Silver

For a fact, it would not be out of place to hand him the captain’s armband because of his experience with the national team

With Enyimba set to play against MFM on Sunday, Noble will also be in line for available selection as the team battles to return to the continent. Though the competition at Enyimba–Nigeria’s biggest club is stiff, Noble has consistently made the match day squad

The Super Eagles goalkeeper is poised for a return to the national team and to share the experience he has gotten from the Super Eagles since his first invitation.

At Enyimba’s evening training on Tuesday, 14th June 2022, Noble once again showed why the national team coaches speak highly of him with brilliant reflexes and saves and that drew applause from fans who came to watch, especially after he made three stunning consecutive saves. The Super Eagles goalkeeper made saves after saves and Enyimba’s goalkeeper trainers were obviously impressed

While Salisu Yusuf and his team prepare the list for the CHAN team, they would think about their trusted hands and those whom they have worked with over time and who are deemed reliable. Nigeria cannot afford to miss the CHAN, so the best and experienced hands must be taken

Salisu Yusuf, a veteran coach who surely knows what he wants would like to qualify and do better, winning the CHAN trophy for the first time

Noble is an experienced hand who has played outside Nigeria and has won a league title abroad in 2018 and his brilliant show in the CAF Confederation Cup in the 2018/2019 season caught the attention of Enyimba’s meticulous and highly respected scouts. He has played in Togo for AS Kara and for Pantel Sportive of Cameroon.

He is trusted by Salisu Yusuf, no wonder that the former CHAN silver medalist and the former Super Eagles goalkeeper trainer made sure he got invitations when there are emergencies, like his invitation on November 7 to replace Francis Uzoho in the World Cup qualifier against Liberia and Cape Verde

CHAN 2023 is an avenue to show his leadership qualities and all he has learnt from the Super Eagles coaches and bring his wealth of experience to the fore. No doubt, he is loved by the national team coaches, especially Salisu Yusuf who has an eye for quality

A grand return to the CHAN team is the first step