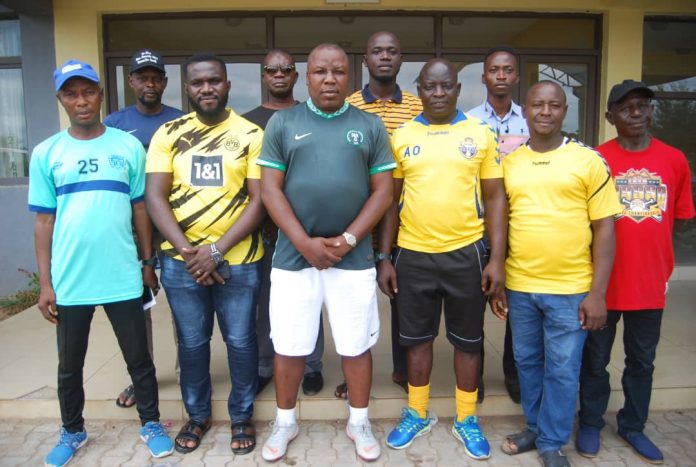 The meeting which was at the instance of the experienced tactician was part of his determination to ensure that football stakeholders in the state gets involved in the task of ensuring an improved and better Kogi United during his reign.

Coach Foley as the gaffer is popularly known said he is a fulfilled man today after meeting with the Sport Writers body because according to him,they are an important and integral part of the sports sector in every society as without their prompt and concise reportage,the society and indeed the world will not get first hand and detailed information about happenings in the world of Sports.

The Tottenham-trained coach thanked the Sport Writers for honouring his invitation and promised that henceforth,familiarization meetings and interactions like this with the body will be consistent and steady during his reign.

“The partnership with you guys is absolutely necessary because the mandate given to me by the Governor Alhaji Yahaya Bello at my unveiling is to secure promotion for Kogi United to the Nigeria Professional Football League at the end of the forthcoming  NNL season and there is no way this can be achieved without the contributions,input and support of the major stakeholders which SWAN is also an integral part of”

Coach folabi said he had an extensive and fruitful discussion with the executive Governor of the state during his unveiling on steps and measures to be taken if the mandate to take the club to the top tier is to be achieved which the Number one citizen promised are being looked into.

Chairman of SWAN in Kogi State Mr Bishop Aturu who spoke unbehalf of the group thanked the coach for deeming it fit to draw the body close.He said the group as the body of Sport Writers in the state consist of individuals who are versatile and good in what they do and are ready to harmonize and partner with Kogi United in the area of  publicity and also ensure a good working relationship.

According to Mr Aturu, “we have in our rank and file practising sport  journalists who are good at what they do and as such we can harmonize our strenght to ensure a very good publicity for the club.We also look forward to more meetings and interactions like this”

A veteran journalist who is the correspondent of the Leadership Newspaper in Kogi State and Ex-Officio of SWAN, Elder Sam Egwu applauded the tactician for the bold step taken to have a good rapport with the Association in the state saying it will also give Kogi United’s activities more coverage and publicity.

The Meeting with the Sport Writers Association Of Nigeria Kogi State Chapter is one a series of Familiarizatiin meetings and interactions the former Udala fc handler has been having with football stakeholders in the state since he assume his new position as Technical Adviser of the Nigeria National League campaigners.Coach Folabi Ojekunle has also met with the Kogi State Football Association,State Referees Council,Supporters of Kogi United fc in a bid to ensure that everybody is involved in the task of Making the Club a force to reckon with when the New Season gets underway.