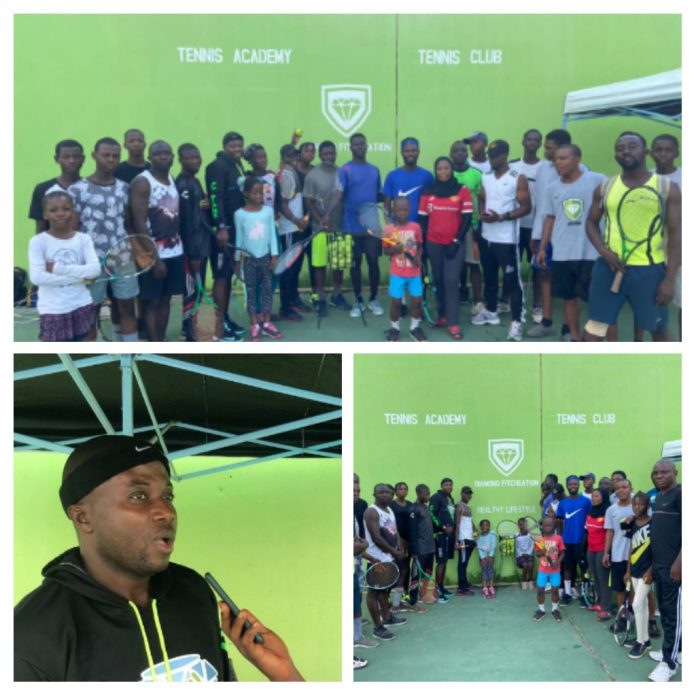 The CEO of Diamond fit creation centre Ilorin, Majeed Wuraola has
described the establishment of Diamond tennis academy and club as an initiative with aims to help people live a fulfilled life.

Speaking in an interview with our correspondent on Sunday, the Offa born ‘digitalpreneur’ stated that the renovation of two tennis courts at the Kwara State Stadium Complex by his organisation and formation of tennis Academy and club will help take the youth out of the street.

“I’m trying to help people to do more than what they can do and help them to live a more fulfilled life. So, the goal is to help people live healthier and happier as long as they exist”

He further explained the rationale behind the renovation of the courts as a means to “drive fitness, wellness, recreation and creativity, particularly in the youth- so that they can channel their energy to do the right thing”

While expressing the significance of combining sports with education, he stressed the need to ‘catch them young’ in a bid to dissuade the youth from engaging in social vices and inculcate time tested values in them.

“We have two arms of our initiative; the Diamond tennis club was created for parents while Diamond tennis academy is meant for the kids with a view to perfect there skills in Tennis” said the helmsman.

Majeed expressed optimism that the future is bright for the kids, noting how sports can create a lot of opportunities and leverage for them in their journey of life.

The club, according to him has been able to produced players of note who are now representing the state, with the hope that they also fly the colour of the country in international competitons in no distant future.

“It’s been very cordial and the commission has been supportive and helpful. The government is very happy with what we are doing and we are getting commendation from them- we are looking forward for more support because this is not what one person can do” said the CEO while applauding the government’s support.

Born to the family of six in Offa local government area of Kwara State, Majeed urged parents and gurdians to enrol their wards in to the Academy in a bid to secure a better future them.

Earlier on Sunday, a webinar was organised with the purpose of inspiring the members of the club to blaze the trail.

One of the guest lecturer in the webinar, Dr. Azeez Lukman, a neurosurgeon who has just been confirmed as a fellow of the prestigious college of Surgeons in London spoke to the members of the club virtually on the importance of commitment and dedication.

While Dr. Azeez , a tennis enthusiast who hails from Offa enjoined the kids to ground themselves in values that last , Mr Seyi Omotunde, an indigene of Igbaja in Kwara State who is a digital icon and CEO of Surfweb also advised the members on the need to be digitally inclined in order to fit into the trend of the modern world.

Among many other things that has been put in place by the centre is a monthly event where club members will be celebrated in view of their birthdays, and the organization of seminars and workshops in order to equip them with modern skills.